Rachel Sussman is a fine art photographer with a BFA from the School of Visual Arts in New York. She studied at the Bard College MFA program, and began a practice-based fine arts PhD at Central Saint Martins in London. Sussman is a MacDowell Colony Fellow.

While we may aspire to live a century, Rachel Sussman documents creatures who don’t bat an eye at a millennium or two. Her photography has captured 4,500 year old bristlecone pines, 12,000 year old yucca, 400,000 year old Siberian bacteria, and many other wizened elders, all with stories longer than all of recorded human history.

The Missing Science of Biological Longevity

Creative photographer Sussman showed beautiful slides of very elderly organisms. The captions were as crucial as the images---naming the species, the place, and the approximate age. You can see many of them here: http://rachelsussman.com/portfolios/OLTW/main.html

The series began with the only animal---an eighteen-foot brain coral in the waters of Tobago, thought to be 2,000 years old. An enormous baobob in South Africa might be 2,000 years old. Then there is the astounding welwitschia mirabilis of the Namibian desert, a conifer that feeds on mist, with the longest leaves in the plant kingdom. After 2,000 years it looks like this: 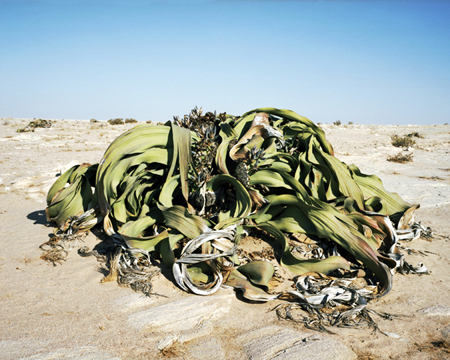 Of course there was a redwood in our Sequoia National Park dated precisely to 2,150 years in age. On a remote Japan island, a two-day hike was needed to track down a gorgeous cedar somewhere between 2,000 and 7,000 years old. In Perthshire, Scotland, a churchyard was long ago build around huge yew tree that now is between 2,000 and 5,000 years old. In Chile the Patagonian cypress gets up to 2,200 years old, and a chestnut tree on the island of Sicily has been there for 3,000 years. On Crete there's an olive tree that might be the oldest in the world---3,000 years. It still bears olives. It may well have been preserved because its hollow trunk served for generations as a chicken coop.

Lichen in Greenland grows 1 centimeter every 100 years. So a large specimen could be dated to 3,000 years. In the Atacama Desert at 15,000 feet in Chile, a shrub called La Llareta grows only 1.5 centimeters a year and is so dense you can stand on its leaf structure. They get to 3,000 years old. The bristlecone pines much beloved at Long Now have been dated up to 5,000 years old.

Send in the clones. Cloned forests are basically one individual that sends up a multitude of stems from a single extensive, very long-lived root system. Sussman found a clonal forest of spruce in Sweden that is 9,550 years old; box huckleberry in Pennsylvania 13,000 years old; aspens in Utah 80,000 years old; and clonal sea grass off of Spain that is 100,000 years old.

So far the age champion is an actinobacteria that lives in Siberian permafrost---alive for 400 to 600,000 years---half a million years.

Sussman found all these creatures with the guidance of remarkable field biologists who have never met each other, because biological longevity is not yet a science. Artist Sussman is startled to be its first practitioner. She has two more years to go on this project. Long Now would love to see a conference mustered at the end of her project to bring together all the scientists she's gotten to know, to see what aggregating their knowledge might conjure up. If sponsors are interested, Long Now would be glad to organize the event.