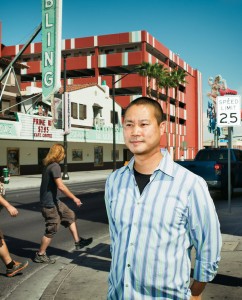 Tony Hsieh is perhaps best known as a successful Silicon Valley entrepreneur. He founded and then sold LinkExchange in the late 01990s, before going on to become CEO of online retail giant Zappos. But what Hsieh really does is build communities. Corporate tech is, for him, primarily a way to bring people together and foster a culture of togetherness. Any business, Hsieh is known to argue, should be evaluated not (just) on its return on investment, but on its ROC – its return on community.

Growing up in the Bay Area, Hsieh revealed an entrepreneurial spirit at an early age. In elementary and high school, he experimented with a variety of money-making ventures – from failed attempts to start a profitable worm farm to a successful mail-order button-making business – and as a Harvard undergrad, he managed an on-campus pizzeria. After graduating with a degree in computer science, the founding of LinkExchange was a logical next step. The company, an online advertising cooperative, became wildly successful: two years after its launch, it sold to Microsoft for several hundreds of millions of dollars. Hsieh, however, hadn’t much cared for the corporate lifestyle and profits-oriented culture at LinkExchange. So when he became involved with Zappos – first as an early investor, soon after as CEO – he set out to do things differently. 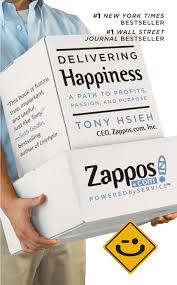 Hsieh puts a lot of heart and effort into the creation of a positive corporate culture. Not only is “service” the number one commandment in Zappos’ oft-cited code of conduct; other items encourage “open and honest relationships,” “family spirit,” and even “fun and a little weirdness.” The company’s quarterly all-hands meetings are reported to be celebratory events full of music performances, employee skits, and bold stunts. Instead of traditional job titles, what you’ll find at Zappos are ‘ninjas’ and ‘monkeys’. In fact, the company recently announced that it is doing away with traditional corporate hierarchy altogether: it’s transitioning into a holacracy, an organizational structure based on principles of self-governance and a democratic distribution of power.

Fortune Magazine consistently ranks Zappos among the nation’s best companies to work for, and Hsieh is eager to share the positivity. In 02010, he published Delivering Happiness, an autobiography-cum-manifesto in which he shows that a focus on company culture and community wellbeing can actually lead to greater profits. The book became so popular that Hsieh and his team soon launched a company and website dedicated entirely to spreading its message.

These days, Hsieh spends much of his time pursuing his mission of community happiness in a very particular location. In downtown Las Vegas, a neighborhood of struggling casinos and weekly hotels long forgotten in the dark shadow of the glittery Strip, he’s been working on a major urban revitalization project.

The Downtown Project was born in 02011, when it became clear that Zappos was growing out of its headquarters in Henderson, Nevada, and Hsieh began to think about building a new campus for his employees. He liked the sense of community created by companies like Nike, Apple, and Facebook, but wanted to avoid the insularity that often characterized their Silicon Valley compounds. As Hsieh explains,

We started brainstorming, what’s the dream campus we can create? And we decided, rather than take this very insular approach to building a campus, let’s actually take more of an NYU-type approach, where the campus kind of blends in with the city, and so rather than focus just on Zappos, focus on the community, and then over time that’ll become this kind of self-feeding thing that will ultimately help retain and attract more employees and be good for the city as well. It’s slightly different from most development projects, in that we’re not trying to master plan from the top down, we really want it to be organic and driven by the community, and part of the goal is for us at Zappos to learn from cities how to be more innovative and scale our culture, and scale our productivity. Once you have that, then the magic just kind of happens automatically. 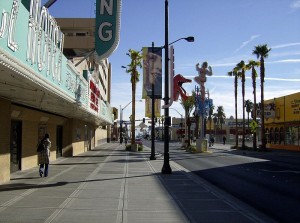 Key in Hsieh’s vision is the notion of collisions: the idea that innovation and creativity sprout from random, unplanned, and informal encounters between people. Hsieh ultimately tries to  build companies – and now, whole communities – that are designed to maximize those collisions.

“It’s the Downtown Project’s big bet,” Hsieh says [in Wired Magazine], “that a focus on collisions, com­munity, and colearning will lead to happiness, luckiness, innovation, and pro­ductivity. It’s not even so big a bet,” he adds. “Research has been done about this on the office level. It’s just never really been applied in a consolidated way to a city revitalization project.”

Big or not, it’s a bet with $350 million riding on it. Hsieh has invested $200 million in local real estate, and $50 million each in education, small businesses, and a tech start-up fund. He’s building schools, developing parks, establishing community work spaces, and organizing arts and music festivals. Inspired by Edward Glaeser’s theories of urban vitality, Hsieh envisions the city as a kind of incubator: by bringing in promising new business and creating spaces for its entrepreneurs to ‘collide’ with one another, he hopes to spur new life and creativity. For Hsieh, innovation and community go hand in hand.

In the end, Hsieh hopes his efforts will pay off in many ways. Beyond setting up shop in Las Vegas, which offered Zappos a more favorable tax treatment, he expects that by making the city more livable it will be good for business and help him attract and retain top-tier talent.

Tony Hsieh will talk about his Downtown Project and the importance of community vitality at the SF JAZZ Center on April 22. You can reserve tickets, get directions, and sign up for the podcast on our Seminars page.