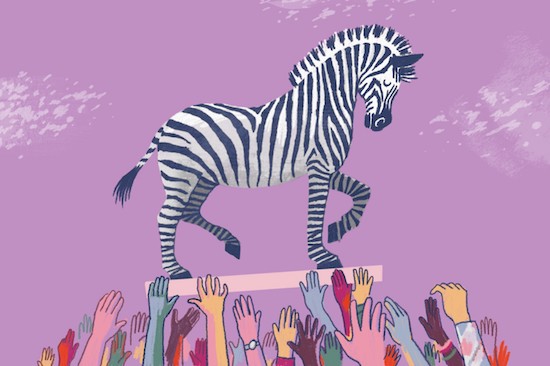 The disruptive potential of Silicon Valley, epitomized in the mantra to “move fast and break things”, was once praised as its killer feature. These days, it is increasingly perceived as a bug.  Startups come and go, but the underlying structure of tech and venture capital persists. Entrepreneurs and investors have grown accustomed to the idea of limited runway, quick exits, and short-term gains, while accepting a 90% failure rate among startups as simply the cost of admission for playing the game. “Growth becomes the overriding motivation,” Noam Cohen wrote in a recent piece for The New York Times. “Something treasured for its own sake, not for anything it brings to the world.”

Entrepreneurs Jennifer Brandel, Mara Zepeda, Astrid Scholz, and Aniyia Williams are after a different sort of disruption—one that transforms tech and venture capital through long-term thinking and alternative business models that result in both profit and social impact. They call their project the Zebra Movement.

It started in 02016, when the Zebra founders wrote a provocative essay that deployed sex metaphors to critique the startup status quo of chasing “unicorns”:

Much is made about Silicon Valley’s culture of “innovation.” But the model for startup venture financing, and the system of rewards driving this supposed innovation, isn’t creative — it’s masturbatory. It wastes potential. It’s uninspired. It leaves founders like us staring at the ceiling.

Yes, we want to build businesses that succeed financially. But we also want so much more than that, and we aren’t alone. Most of the founders we know, many of whom happen to be women, are driven to build companies that generate money and meaning. And they’re in it for the long haul — not just to get their jollies, make their names, and exit.

The essay went viral, generating responses from hundreds of founders, investors, and advocates. The Zebra founders followed with a manifesto earlier this year to provide the beginnings of a solution to what they called the “broken” structure of technology and venture capital.

This is an urgent problem. For in this game, far more than money is at stake. When VC firms prize time on site over truth, a lucky few may profit, but civil society suffers. When shareholder return trumps collective well-being, democracy itself is threatened. The reality is that business models breed behavior, and at scale, that behavior can lead to far-reaching, sometimes destructive outcomes.

We believe that developing alternative business models to the startup status quo has become a central moral challenge of our time. These alternative models will balance profit and purpose, champion democracy, and put a premium on sharing power and resources. Companies that create a more just and responsible society will hear, help, and heal the customers and communities they serve.

The founders enlisted the Zebra as the symbol for their movement: 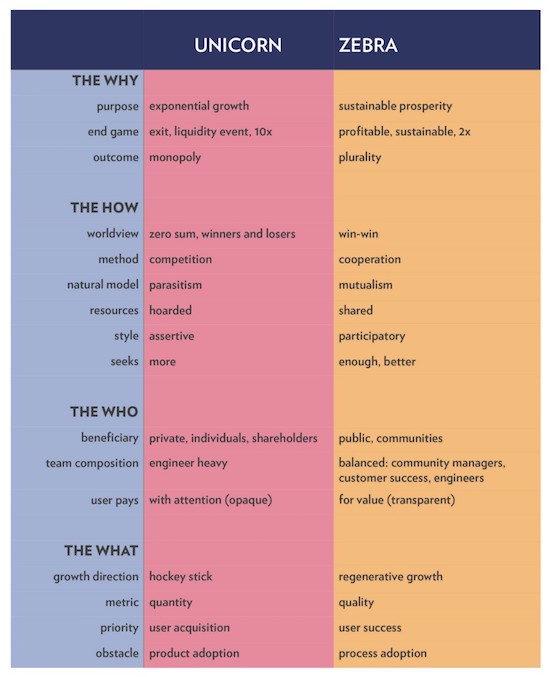 Thousands responded after the Zebra founders proposed a conference to gather together and further define the goals and ethos of their movement. DazzleCon (a “dazzle” being a gathering of zebras) will be taking place from Wednesday, November 15 to Friday, November 17, 02017 in Portland, Oregon. Long Now has joined the Rockefeller Foundation, the MacArthur Foundation, and the Knight Foundation, among others, in supporting the Zebra founders by sharing resources, ideas and strategy for considering and applying long-term thinking to the growing conversation within the movement. We will be co-partnering with DazzleCon for the evening program of keynote talks on Wednesday, November 18th. (The evening program is open to the public; Long Now members can receive a $15 discount by entering the promo code LONGNOWDAZZLE on the Eventbrite page). 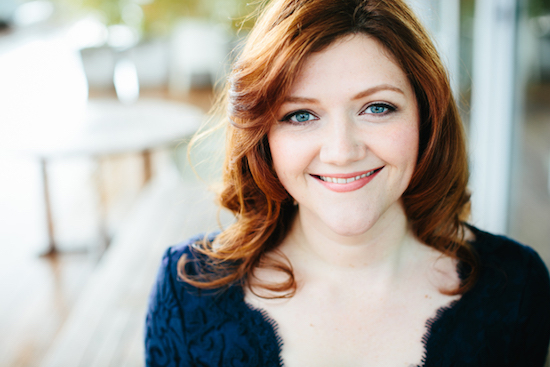 We asked one of the founders, Mara Zepeda, to reflect on the role she believes long-term thinking should play in technology and Silicon Valley:

I grew up with many tattered copies of the Whole Earth Catalog. I would later connect with Howard Rheingold, who sits at the intersection of the Whole Earth Catalog ethos and technology, as a friend and teacher (we also both graduated from Reed College). I believe the deep, nuanced, systems thinking approach the Long Now Foundation promotes is so necessary in today’s culture. As the co-founder and CEO of a technology company, I’ve noticed its absence most acutely in technology, where a pervasive “winner takes all” culture of investor profits, billion dollar companies, and quick exits reigns supreme. Long-term thinking is what is so desperately needed in these times.

We need to return to the values of thinkers like Stewart Brand, Alan Kay, Howard Rheingold, Christopher Alexander, and Douglas Engelbart who believed that technology should augment humans, and create thriving ecosystems of collective intelligence.

In The Clock of the Long Now, Stewart Brand quotes institutional management advisor Rosabeth Moss Kanter. The gist is that people who take the long view will do so when they trust their leaders, the rules of the game are fair, they will share equitably in the returns, and feel a commitment to those who come after them. Zebra companies embody and promote these values of trust, shared prosperity, and a long-term investment in the earth, community, and each other.

Aligning around these principles creates better people, more ethical products, cooperative communities, and a kinder and more equitable world. We are thrilled to partner and share this wealth of knowledge across disciplines and generations.

If you’re interested in attending DazzleCon, or would like to know more about the Zebra Movement, head here. To attend the evening program at a discounted rate, enter LONGNOWDAZZLE on the Eventbrite page.