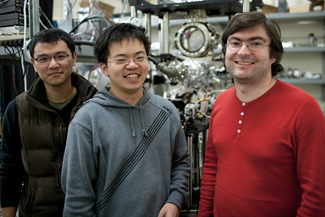 Interested in determining the simplest possible way of measuring time, Müller has discovered a way to turn matter into a natural clock.

“When I was very young and reading science books, I always wondered why there was so little explanation of what time is,” said Müller, who is also a guest scientist at Lawrence Berkeley National Laboratory. “Since then, I’ve often asked myself, ‘What is the simplest thing that can measure time, the simplest system that feels the passage of time?’ Now we have an upper limit: one single massive particle is enough.”

This is not an atomic clock in the traditional sense; rather than measuring the energy emissions of electrons, Müller’s timekeeper looks at atoms as a whole by making use of a particular feature of matter: its building blocks behave like both particles and waves.

Quantum mechanics was born when physicists decided that light was neither a wave (as argued by Huygens) nor a beam of particles (as Newton thought), but both. In 1924, De Broglie discovered that this duality was true for all forms of matter, and developed a formula to calculate the wavelength of different particles.

Müller theorized that if you can find a way to measure these wavelengths experimentally – if you can construct a clockwork to count an atom’s oscillations – you have a very fundamental unit of time. Unfortunately, these atomic frequencies (also known as Compton frequencies) still outpace our best instruments of detection. But Müller has found a possible solution in yet another one of Einstein’s discoveries. Because motion slows the passage of time, a moving atom oscillates at a slower pace than a stationary one. The difference between the two frequencies may be measurable, and thereby give us a unit of time.

Though Müller’s mechanism is not yet as precise as an atomic clock, improvement of the design will increase its accuracy. Either way, the implications are far-reaching. If matter can be used to count time, the reverse is also true: time can become a unit of measurement for matter. In other words: Müller’s work shows that time is woven into the most fundamental building blocks of our world. One might even say it’s what we’re made of.