In October 02010 Lera Boroditsky spoke for Long Now on How Language Shapes Thought in a talk that resonates with the Rosetta Project, Long Now’s language preservation project.

SALT audio is free for everyone on our Seminar pages and via podcast. Long Now members can see all Seminar videos in HD. Video of the 12 most recent Seminars is also free for all to view.

Twice a month we highlight a Seminar About Long-term Thinking (SALT) from our archives. Members can watch this Seminar video here, and this talk in particular is even better with the visuals.

Lera Boroditsky is a cognitive scientist at UC San Diego (and was previously at MIT and Stanford). She has been named one of 25 Visionaries changing the world by the Utne Reader; other honors include being named a Searle Scholar, a McDonnell scholar, and an NSF Career award. She is Editor in Chief of Frontiers in Cultural Psychology.

In How Language Shapes Thought Boroditsky presents fascinating insights into the relationship between languages and thought. Drawing directly from her own work and other contemporary research, the questions she addresses include: whether those who speak different languages think differently? Does learning a new language shape the way you think? Do multilingual individuals think differently when speaking different languages? Are some thoughts unthinkable without language? 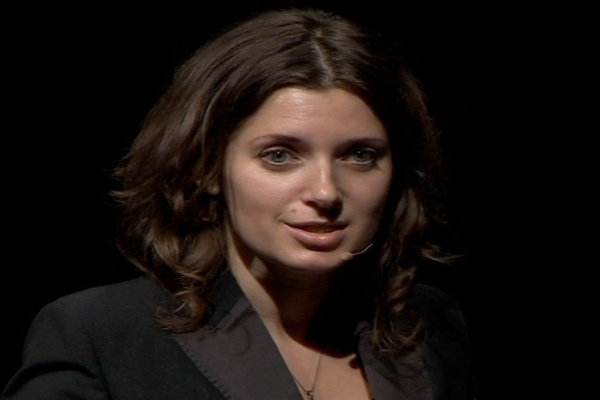 Time is the most common noun in the English language said Boroditsky. (Followed by person, year, way, and day.) Time is often expressed as travel in space: “We’re coming up on Christmas.” But some languages put the future in front of us, and others put it behind us. For Aborigines that Boroditsky studied in north Australia, time and sequence gets blended into their profound orientation to the cardinal directions. They don’t use relative terms like “left” and “right,” but absolute compass terms (There’s an ant on your southwest leg), and they have extraordinary orientation skills.

She cites a wide range of languages and research from around the world in a scientific tour through cultures and cognition that includes a few experiments with the audience at the Seminar. This is a fun and accessible talk filled with 02000’s pop cultural references like Dick Cheney’s quail hunting mishap and “Freedom Fries”–Boroditsky even has some helpful tips on how to better annoy the French.

The Seminars About Long-term Thinking series began in 02003 and is presented each month live in San Francisco. The series is curated and hosted by Long Now’s President Stewart Brand. Seminar audio is available to all via podcast.

Long Now members can watch the full video of this Seminar here—you must be logged in to the site. Membership levels start at $8/month and include lots of benefits. Join Long Now today.