Much of the internet community has now seen with their own eyes that pitch – a substance that normally seems solid – flows and drips like a liquid. The fact has been largely known for some time, but not directly observed until now.

The original pitch drop experiment was created by an Australian physics professor named Thomas Parnell in 01927 at the University of Queensland in Brisbane. His demonstration continues to this day and is among the oldest running scientific experiments in existence. In the 8 decades since Parnell melted some pitch into a glass cone and broke the tip off to form a funnel, the pitch has dripped out 8 times but never been directly observed. An almost identical experiment at Trinity College, Dublin was started in 01944 and it was this pitch that finally dropped on camera last week.

Though it will provide new and valuable data, capturing the pitch drop with video does not mark the end of the experiment. In fact, estimates of the amount of pitch left in the funnel indicate that another century of pitch drops could remain. But while the unique endurance of this particular experiment is inspiring, it is, as Radiolab so beautifully expressed, the contrast in scales that most defines the pitch drop. A drop may take a decade to form, but it breaks off in the blink of an eye. 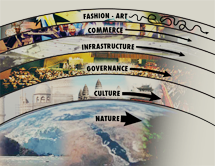 But processes with a lot of relative variability in the time their constituent events take remain tricky, even more so when the blink-of-an-eye part is still pretty long compared to a human attention span, as in the case of climate change. The pitch drop experiment is a great demonstration of this type of process and a great reminder that long-term thinking isn’t exclusively about going slow.