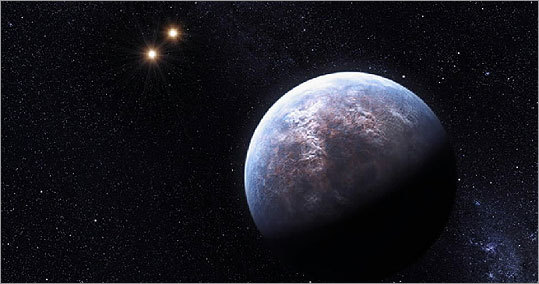 This artist rendering provided by the European South Observatory shows some of the 32 new planets astronomers found outside our solar system.

This article was sent in by Samuel Arbesman Research Fellow in Health Care Policy at Harvard Medical School.  It was originally printed in the Boston Globe.

When people think of knowledge, they generally think of two sorts of facts: facts that don’t change, like the height of Mount Everest or the capital of the United States, and facts that fluctuate constantly, like the temperature or the stock market close.

But in between there is a third kind: facts that change slowly. These are facts which we tend to view as fixed, but which shift over the course of a lifetime. For example: What is Earth’s population? I remember learning 6 billion, and some of you might even have learned 5 billion. Well, it turns out it’s about 6.8 billion.

Or, imagine you are considering relocating to another city. Not recognizing the slow change in the economic fortunes of various metropolitan areas, you immediately dismiss certain cities. For example, Pittsburgh, a city in the core of the historic Rust Belt of the United States, was for a long time considered to be something of a city to avoid. But recently, its economic fortunes have changed, swapping steel mills for technology, with its job growth ranked sixth in the entire United States.

These slow-changing facts are what I term “mesofacts.” Mesofacts are the facts that change neither too quickly nor too slowly, that lie in this difficult-to-comprehend middle, or meso-, scale. Often, we learn these in school when young and hold onto them, even after they change. For example, if, as a baby boomer, you learned high school chemistry in 1970, and then, as we all are apt to do, did not take care to brush up on your chemistry periodically, you would not realize that there are 12 new elements in the Periodic Table. Over a tenth of the elements have been discovered since you graduated high school! While this might not affect your daily life, it is astonishing and a bit humbling.

For these kinds of facts, the analogy of how to boil a frog is apt: Change the temperature quickly, and the frog jumps out of the pot. But slowly increase the temperature, and the frog doesn’t realize that things are getting warmer, until it’s been boiled. So, too, is it with humans and how we process information. We recognize rapid change, whether it’s as simple as a fast-moving object or living with the knowledge that humans have walked on the moon. But anything short of large-scale rapid change is often ignored. This is the reason we continue to write the wrong year during the first days of January.

Our schools are biased against mesofacts. The arc of our educational system is to be treated as little generalists when children, absorbing bits of knowledge about everything from biology to social studies to geology. But then, as we grow older, we are encouraged to specialize. This might have been useful in decades past, but in our increasingly fast-paced and interdisciplinary world, lacking an even approximate knowledge of our surroundings is unwise.

Updating your mesofacts can change how you think about the world. Do you know the percentage of people in the world who use mobile phones? In 1997, the answer was 4 percent. By 2007, it was nearly 50 percent. The fraction of people who are mobile phone users is the kind of fact you might read in a magazine and quote at a cocktail party. But years later the number you would be quoting would not just be inaccurate, it would be seriously wrong. The difference between a tiny fraction of the world and half the globe is startling, and completely changes our view on global interconnectivity.

Mesofacts can also be fun. Let’s focus for a moment on some mesofacts that can be of vital importance if you’re a child, or parent of a child: those about dinosaurs. Just a few decades ago, dinosaurs were thought to be cold-blooded, slow-witted lizards that walked with their legs splayed out beside them. Now, scientists think that many dinosaurs were warm-blooded and fast-moving creatures. And they even had feathers! Just a few weeks ago we learned about the color patterns of dinosaurs (stripes! with orange tufts!). These facts might not affect how you live your life, but then again, you’re probably not 6 years old. There is another mesofact that is unlikely to affect your daily routine, but might win you a bar bet: the number of planets known outside the solar system. After the first extrasolar planet around an ordinary star made headlines back in 1995, most people stopped paying attention. Well, the number of extrasolar planets is currently over 400. Know this, and the next round won’t be on you.

The fact that the world changes rapidly is exciting, but everyone knows about that. There is much change that is neither fast nor momentous, but no less breathtaking.

Samuel Arbesman is a postdoctoral fellow in the Department of Health Care Policy at Harvard Medical School. He is a regular contributor to Ideas. He has started a new website devoted to mesofacts, which can be found at mesofacts.org.