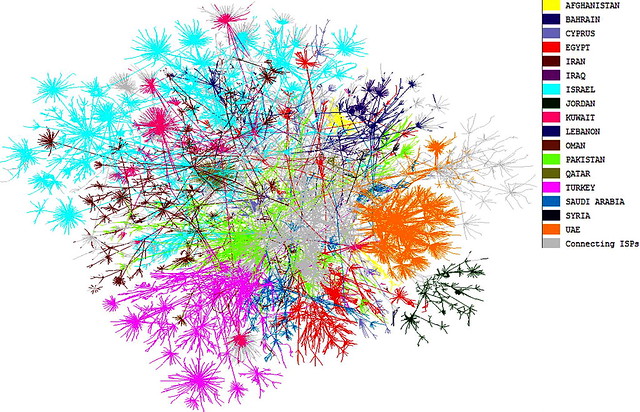 Internet map of the Middle East

A computer defeats humans on a television game show. An information network brings down a series of dictatorships. We are witnessing a massive explosion in data, and an equally massive explosion in our ability to process and distribute it. The fall of the Soviet Union may have been driven, in part, by the fax machine; today, revolutions are driven by Wikileaks, Facebook, and Twitter. (You say you want a revolution? Google it.) Or, as Ken Jennings wrote on his monitor when he lost at Jeopardy to IBM’s Watson: “I for one welcome our new computer overlords.”

Some recent news articles about information overload — as well as some additional stories:

1. “A whopping 94% of global data is now stored digitally, up from 0.8% 25 years ago”: As computer capacity soars, users drowning in data

3. The Internet = us: World’s total CPU power: one human brain

4. Or maybe, surpasses us: Robots replace teachers at 21 schools in South Korea

5. Meanwhile: maybe our energy problems are solvable: Today’s clean tech could power the world by 2050

7. Shocking how many Americans don’t believe in evolution (this time, it’s the science teachers): Evolution still struggling in public schools

8. That’s okay, we can rewrite evolution anyway: Mammoth ‘could be reborn in four years’