In September 02010 Richard Rhodes spoke about Twilight of the Bombs his history on nuclear weapons from the end of the Cold War to the 21st Century. Rhodes won the Pulitzer prize for The Making of the Atomic Bomb (01987) his first of four books chronicling the rise of nuclear science from the laboratory to the battlefield. Twilight of the Bombs is the final book of that series, covering an era of smaller arsenals but continuing challenges.

Richard Rhodes speaks about his latest book at The Interval on March 10, 02015

Rhodes warns of the devastating impact to the entire world of even a “regional” nuclear war between nations like India and Pakistan. He tells fascinating stories about Niels Bohr’s earnest warning to FDR and Churchill; the many close calls of the Cold War era that were never publicized; anecdotes about nations like South Africa, Libya, Iraq, and Sweden who all pursued or even built weapons to some degree; 10 steps for nuclear abolition; and his concern that the US may pose the biggest challenge to world disarmament.

How much did the Cold War cost everyone from 1948 to 1991, and how much of that was for nuclear weapons? The total cost has been estimated at $18.5 trillion, with $7.8 trillion for nuclear. At the peak the Soviet Union had 95,000 weapons and the US had 20 to 40,000. America’s current seriously degraded infrastructure would cost about $2.2 trillion to fix—all the gas lines and water lines and schools and bridges. We spent that money on bombs we never intended to use—all of the Cold War players, major and minor, told Rhodes that everyone knew that the bombs must not and could not be used.

Richard Rhodes is the author or editor of twenty-four books including The Making of the Atomic Bomb (Pulitzer Prize and National Book Award winner); Dark Sun: The Making of the Hydrogen Bomb (shortlisted for a Pulitzer Prize); and most recently Hell and Good Company (02015), a history of the Spanish Civil War. He has been a visiting scholar at Harvard and MIT and appeared on public television’s Frontline and American Experience series. His work is funded by the Ford Foundation, the Guggenheim Foundation, the MacArthur Foundation Program in International Peace and Security and the Alfred P. Sloan Foundation.

Tickets are available for Richard Rhodes talk at The Interval: March 10, 02015 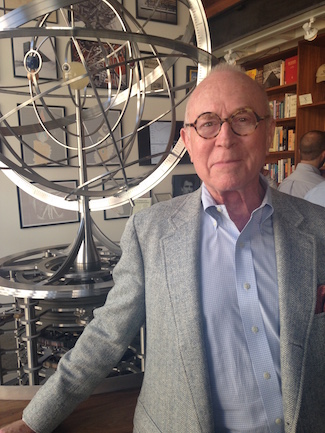 Richard Rhodes will speak at The Interval on March 10, 02015
photo by Catherine Borgeson

Everyone can watch full video of the 12 most recent Long Now Seminars. Long Now members can watch video of this Seminar video or more than ten years of previous Seminars in HD. Membership levels start at $8/month and include lots of benefits.