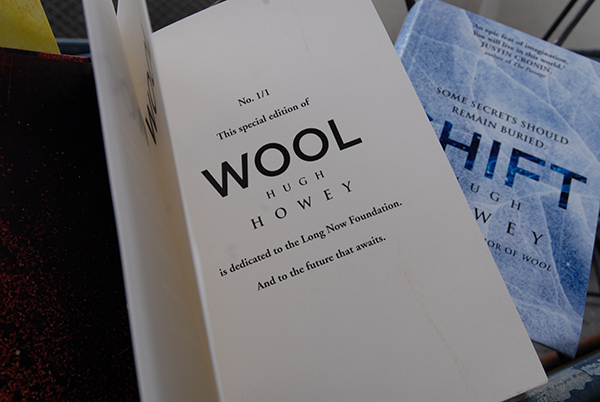 Science fiction author Hugh Howey donated to the Manual for Civilization a one-off hard cover set of his Silo Saga with a special title page for The Long Now Foundation. 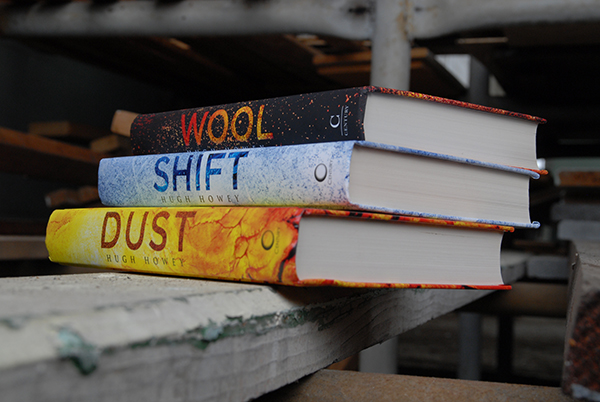 The dystopian science fiction series developed out of a single novella Hugh Howey self-published on the Web in 02011.  He continued the story with four more installments, which now comprise the Omnibus edition of Wool.  Shift (books 6-8) are a prequel to Wool (books 1-5), Dust is the conclusion.

Without giving away any spoilers, each story has its own resolution, adds clarity and answers questions from the last, but then creates some larger questions:

What would human beings be like if for several hundred years they had been forced to live in a giant container, a refuge from the destruction of the planet? Would we recognize them? Would they have changed? Would we understand their concerns and desires? Our ubiquitous human nature and some of its seemingly unchanging characteristics are major themes in Howey’s Wool. Tens of thousands of people are packed into a silo buried in the Earth, protected from the toxic atmosphere which surrounds it. Yet despite hundreds of years, the occupants still long to explore, to expand their horizons. Howey explores the traditions, mores and laws necessary to protect this remnant of humanity from the creative urges and deep desires which always seek to push beyond the safe confines of the silo into the unknown. –GeekDad, Wired Magazine 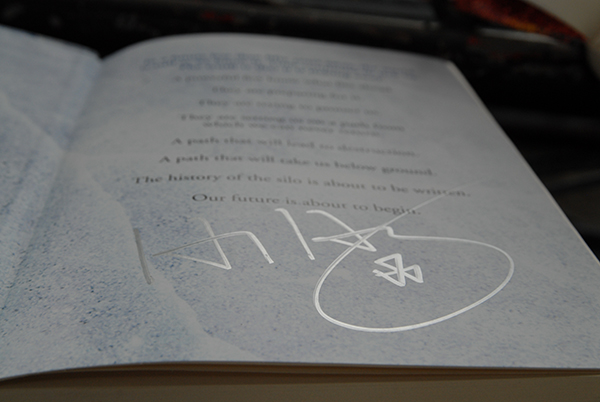 More from Manual For Civilization —

Science fiction has long had a fascination with the extreme long-term.

Tim O’Reilly’s Book List for the Manual for Civilization