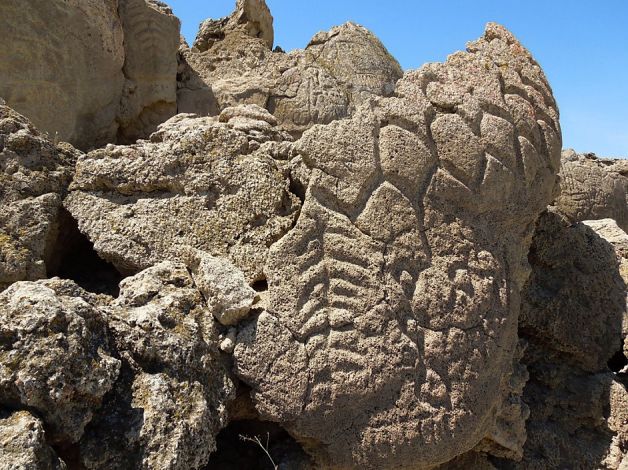 The story of the oldest Americans is largely unknown to us; the first people to arrive on the North American continent didn’t leave behind any material clues for later generations to find. But a recent discovery in Nevada may now offer us a little glimpse into their world. In a forthcoming issue of the Journal of Archaeological Science, a team of researchers reveals that a series of petroglyphs, carved into boulders near Pyramid Lake, are even older than previously suspected – and might be attributed to the first people to set foot in the American West.

Unlike those ancient Americans, weather patterns do leave their mark on the world around them – and this allowed paleoclimatologist Larry Benson to determine that the images are about 10,000, or about 14,000, years old. The petroglyphs are carved into what Benson knew to be a lakebed, and must therefore have been created during a dry period. Chemical testing of samples from the site revealed that such a dry period occurred between 14,800 and 13,200 years ago, and again between 11,300 and 10,500 years ago. Whichever dating turns out to be the right one, these are easily the oldest petroglyphs that have been found on the North American continent, and will inform what we know about the first people to cross the Bering Strait.

The images are composed of abstract swirling and geometrical patterns. The researchers have suggested that the carvings may depict natural phenomena, such as leaves, clouds, or even the Milky Way. But without other evidence of culture from this period, it will be difficult to determine what exactly the etchings represent – or who created them.

“We have no idea what they mean,” Benson said of the Winnemucca Lake petroglyphs. “But I think they are absolutely beautiful symbols. Some look like multiple connected sets of diamonds, and some look like trees, or veins in a leaf. There are few petroglyphs in the American Southwest that are as deeply carved as these, and few that have the same sense of size.”