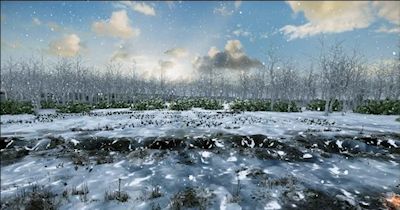 A team of archaeologists at the University of Birmingham may have found the earliest evidence of human time keeping activity. In a paper published earlier this week, the researchers announce that they have discovered a 10,000-year-old lunar calendar, etched in the earth near Aberdeen, on Scotland’s North Sea Coast.

When this ancient stone-age site was first discovered by an aerial archaeological expedition in 02004, scientists were baffled by a series of 12 pits, dug into the terrain along a neat 50-meter arc. But new analysis has now revealed that these holes in fact comprise a system that tracks and mimics the regular cycle of lunar phases.

There are 12.37 lunar cycles (lunar months) in a solar year – and the archaeologists believe that each pit represented a particular month, with the entire arc representing a year. The 12 pits may also have played a second role by representing the lunar month. Mirroring the phases of the moon, the waxing and waning of which takes 29 and half days, the succession of pits, arranged in a shallow arc (perhaps symbolizing the movement of the moon across the sky), starts small and shallow at one end, grows in diameter and depth towards the middle of the arc and then wanes in size at the other end (The Independent).

More impressive yet, these mesolithic timekeepers may even have been aware of a common logistical snag associated with lunar calendars: the fact that the monthly cycle of moon phases does not neatly align with the length of a solar year. The Birmingham archaeologists have found evidence to suggest that this landscape calendar included a way to mark the mid-winter solstice, allowing this community to re-calibrate their calendar with the annual progression of seasons.

This calendar is nearly 5,000 years older than the oldest time-keeping structures found in Mesopotamia, and pre-dates the first-known emergence of sedentary societies in Europe. But this evidence of time tracking suggests that these Scottish hunter-gatherers may in fact have formed a more stable and organized community than previously thought. As Vincent Gaffney, lead researcher on the project, explains,

“The significance about this is that hunter gatherers have taken the decision, or have the capacity or the need to actually have a formal approach to time itself. And in doing that, they’re not just thinking of the past, of what’s happened in the past, they’re anticipating the time to come, and they’re probably scheduling activities as a consequence of that. And that can lead to all sorts of social change. They’re probably, in our opinion, trying to use this, for instance, to anticipate the run of fish in the river Dee, it’s a very fertile source of food for them, but that in itself allows them to congregate, larger communities to gather together, and in fact their social networks and capacity changes in consequence. So all of these things cascade. And it’s a remarkably early period for this to happen. Normally we associate this sort of monument with the Neolithic, with sedentary farming communities rather than hunter-gatherers, certainly at this early stage.”