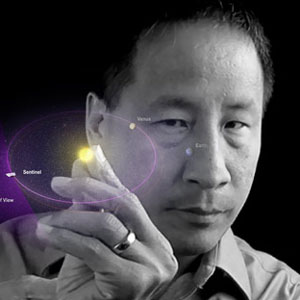 It’s not often that you get to meet someone who may one day save civilization. Ed Lu, three-time NASA astronaut and CEO of The B612 Foundation, has made it his life mission to protect us from Near-Earth Asteroids (NEAs). Although the chances of a serious astroid impact is very low for any specific day, over hundreds of years the event becomes inevitable, and thus a serious concern in the long now.

The story starts in 2001, when Ed Lu, fellow astronauts Piet Hut and Rusty Schweickart, and 20 other experts held a conference to discuss the threat of an asteroid hitting earth. The result was The B612 Foundation, a non-profit dedicated to researching and preventing asteroid impacts. Their first goal was to figure out if we have the technology to deflect an asteroid in impact orbit. After extensive research, B612 determined that, caught early enough, it is fairly easy to derail an asteroid orbit with current technology. The idea is that a tiny adjustment to the asteroid’s trajectory over time results in a sizable shift, enough to drive an asteroid out of harm’s way. To induce this shift, Ed Lu and other scientists have been working on a Gravity Tractor, the details of which we’ll leave to Lu.

After establishing the feasibility of this technology, B612 realized that all of the methods for diverting asteroids required early detection, which led to their current project, The Sentinel Mission. The Sentinel is a satellite that will orbit the sun and and track asteroids. With the information from Sentinel, we will be able to track 90% of asteroids over 140 meters. With this information, we will be able to see whether an asteroid will impact earth decades down the line, and correct the flight path accordingly. In the video below, Lu gives a short explanation of Sentinel and how it will capture the relavent data on the million asteroids that might pay us a visit:

To learn more about B612 and asteroid detection, come join us on June 18th at Marines’ Memorial Theatre.  You can reserve tickets, get directions, and sign up for the podcast on the Seminar page. If you are a member, please check your email for special ticketing instructions.