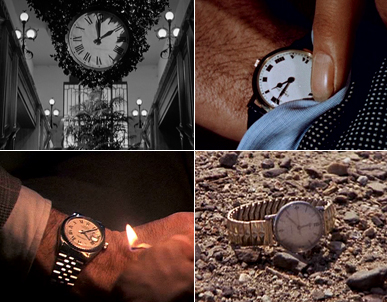 The exhibit is a 24-hour long film that consists of snippets from the past 70 years of cinematic history–the clips all unified by the common trait of having clocks or referencing a time of day in them. To accomplish this task, Marclay hired a team of assistants that watched films and gathered sections that included a clock or watch, eventually compiling a repository of thousands of clips that were sorted by time. Marclay, whose past work has included remixing and DJ-ing, stitched together the clips into a 24-hour video collage. The scenes range from hospitals and car chases to bedrooms and restaurants, all spliced together and reminding us of the role of time in narrative.

The film is meant to be played for 24 hours straight, with the time on the clocks in the film perfectly matching the actual time of day. In this sense the entire piece is a clock itself, as well as a meditation on how we use clocks – it implicitly asks for 24 hours of your time, yet you spend the entire film literally watching the minutes tick by.

One of the central objectives of the Clock of the Long Now is to encourage people to think about deep time and how it has and will shape the world around us. In contrast, Marclay’s piece emphasizes the small moments that make up life–waiting for someone at a restaurant, realizing that you’re late to an appointment, suddenly waking up at 4am. By mashing these moments together into a full day of disorienting situations, Marclay asks us to contemplate just what it is that creates our unified sense of these moments.

The exhibit will be shown until June 2nd. During this time, there will be several 24 hour screenings for those that want see the work in its entirety.