“The Decline of Violence” 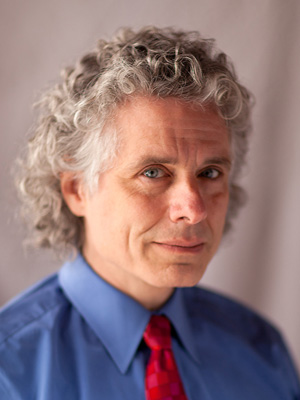 Steven Pinker’s prolific output for both academic and popular audiences has made him one of the most well-known evolutionary psychologists in the world. Trained formally in cognitive psychology, Pinker has tirelessly applied lessons from his groundbreaking research to a better understanding of the roles nature and nurture play in shaping human behaviors like language acquisition and violence. His popular books have taken on broad topics of human nature and explored their evolutionary and psychological roots.

The Language Instinct: How the Mind Creates Language describes how humans learn language and surveys evidence indicating that our unique ability to communicate verbally has evolved to be an innate instinct. Though writing and the specifics of a particular language must be learned, all humans acquire grammar, implying that its basis is genetic and long-standing.

The Blank Slate: The Modern Denial of Human Nature follows a similar line of inquiry, arguing that the human mind is not simply a blank slate onto which society imprints all behavioral characteristics. Evolution has clearly shaped our psychology, Pinker argues, and accepting this fact does not validate racism or social Darwinism. If explored empirically, rather, an understanding of the evolutionary underpinnings of human behavior can lead us to more effective and equitable governance and stronger bonds across cultural differences. 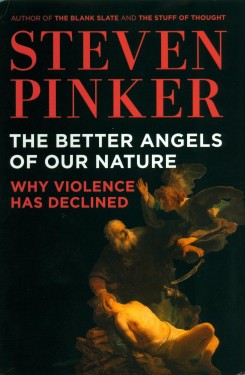 Pinker’s most recent book and the subject of his upcoming lecture, The Better Angels of our Nature: Why Violence has Declined, further unpacks an underlying theme of some of his earlier books. If The Language Instinct proved language is an evolutionary adaptation encoded deep within our biology and The Blank Slate sought to cement the idea that humanity has many characteristics like language that add up to an essential nature that can be empirically understood (even if that nature is often highly customized within particular cultures), The Better Angels of Our Nature continues in this direction by showing that understanding what is essential about that nature and what about it can be culturally modified allows us to more rationally assess and govern ourselves.

In his New York Times review of the book, Peter Singer points out that it might seem strange to hear how humans have changed from someone who has made a name studying how we do not (Pinker once responded to an Edge.org question about how the internet is changing the way he thinks with “Not at all.”), but he explains that Pinker has never argued that nature and nurture are mutually exclusive. Rather, understanding our nature allows us to better nurture the traits we want to emphasize, reason being chief among those because it allows us “to detach ourselves from our immediate experience and from our personal or parochial perspective, and frame our ideas in more abstract, universal terms. This in turn leads to better moral commitments, including avoiding violence.”

Steven Pinker presents the voluminous evidence that we’re becoming more peaceful and explains why on October 8th at the Herbst Theater. You can reserve tickets, get directions and sign up for the podcast on the Seminar page.