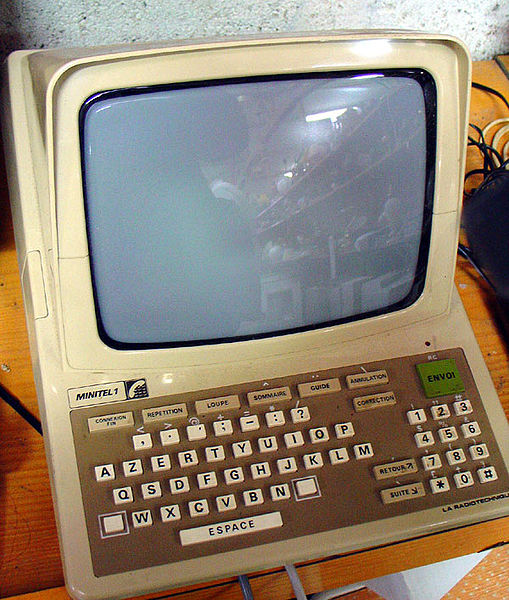 First pioneered in Brittany during the late 01970s, the PTT (France’s national telecommunications provider) launched the network nationwide in 01982. Minitel was a videotex service: an interactive network run through the telephone lines, that offered a variety of services when prompted by user input. A few keystrokes on a Minitel terminal provided access to your bank account; a few others opened a telephone directory; an “online” mailbox; or a hotel reservation system.

Small, grey, boxy terminals were distributed free of charge to millions of subscribers and before long, households all over France were connected to the network.

It was an innovative, avant garde technology in its time. The BBC writes:

As President Jacques Chirac boasted: “Today a baker in Aubervilliers knows perfectly how to check his bank account on the Minitel. Can the same be said of the baker in New York?” Chirac was speaking in 1997, exactly half way through the life-cycle of France’s greatest telecoms innovation. At the time, he could be forgiven for thinking it would last forever. This was the high point, with nine million Minitel sets installed in households around the country, an estimated 25 million users, and 26,000 services on offer.

But last forever it would not: after 30 years of service, Minitel signed off for good on June 30th. Now that most people turn to the Internet for their connection to social networks, information services, and consumerism, the network has become obsolete and too costly to maintain.

Several media outlets suggest that Minitel was doomed for failure. At the height of the network’s growth, the World Wide Web was already growing into a formidable competitor. And as an open platform, the Internet allowed for more creativity and free development than the highly regulated Minitel. Though innovative and useful in its time, the network simply had not been built to evolve or adapt. Ars Technica quotes Jérémie Zimmerman, head of the French digital rights group La Quadrature du Net:

The Minitel was innovative for about 20 minutes, and died due to where it failed: by its centralization that never allowed it to evolve technologically: because it was under the control of France Telecom, for whom that control translated into huge profits. It is true that the Minitel taught French people how to use a keyboard and how to connect to online services. But it taught them the opposite of what is the most important lesson about the internet: its universality, and the decentralized character of its architecture.

Others, though, feel that the Minitel should not be dismissed or forgotten as an obsolete form of technology. The BBC quotes Valerie Schafer, co-author of a recently published book about Minitel:

People forget that many of the ideas that helped form the internet were first of all tried out on Minitel. Think of the payment system, not so different from the Apple app-store. Think of the forums, the user-generated content. Many of today’s web entrepreneurs and thinkers cut their teeth on Minitel.

Obsolete and doomed, or innovative and generative, Minitel reminds us not only that technology is forever evolving, but also that every life-altering technological advancement is born of something. Minitel helped shape the Internet as we know it today – just as the Internet will help shape our communications networks of the future.