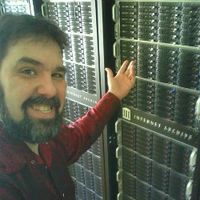 The Archive Team has been called many things. Here at Long Now we’ve been following their work, which was recently featured by NPR’s On The Media. In a brief interview for the program, founder Jason Scott talked about some of the work they’re doing, and why it’s important.

Scott describes his group as a kind of emergency response team that comes into action whenever a social media site shuts down. We share our personal lives on these sites by uploading pictures, music, and other materials through their free services. But, Scott warns, such platforms are inherently fragile and short-lived – and what happens to our stuff when they’re taken down?

“People put their lives online, and then one day wake up and realize, it’s not there anymore. They are keeping their memories on spinning magnetic pieces of metal.”

That’s where the Archive team comes in. “We’ve been compared to firemen,” Scott says: they enter doomed sites and “try to grab what [they] can,” hoping to salvage the photos, writings, and other memories people had stored there.

An ambitious goal – but it does prompt a question: is everything we upload to the net really worth saving? Isn’t most of it a sea of insignificant snapshots and mundane memories? Scott counters that even the most trivial piece of information may harbor a nugget of historical gold:

“… the example that I give is a civil war letter to a wife from her husband who is on the front lines. It might be the most trivial thing to say, ‘hope the cows are OK, hope you’re fine,’ but there’s so much other information coded in there. There could be a watermark showing that a company that said it never worked for that side, did in fact sell paper to that side. It could be a certain kind of ink, it could be that that one front guy became a general, and this is one of the few cases of him signing his own name. I know it’s a stretch, but there are people right now, taking some of the things we download, and doing cultural analysis. This is what happened when life went online. This is what happened when people reached a larger audience than their genetic line had ever reached. What did they do, given that power? And so, even though we might objectively say, this is trivial, I wouldn’t want these read out to me, one by one, forever, everything historical that we see is because a whole line of people said, ‘let’s not throw out that box’, let’s not delete that tape, let’s not get rid of those pictures. And, I don’t want to be the guy who decided, ok, this is good, this is bad, and then 100 years later be hated.”

In other words, even the tiniest tweet could give future generations some crucial insight into the workings of 21st century culture. The Archive Team is here to save it all from being swallowed by the digital dark age, one site at a time.