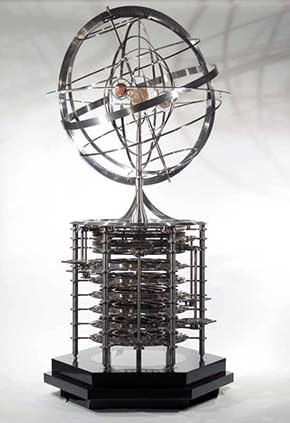 You can see more about the Orrery in Discover magazine's November 02005 cover story.

The Orrery is an eight-foot tall planetary display. It shows the relative position of the six human-eye visible planets (Mercury through Saturn). The lower six layers are a mechanical-binary calculation engine, each with a geneva output to a gear that rotates a corresponding planet. Each layer is calculating a fraction of the planetary orbits to 28 bits of accuracy. Mercury takes about 88 days to make one revolution, Earth about 365 days, and Saturn takes 29.7 years.

The Orrery is primarily made of monel (a nickel-copper alloy) and stainless steel. The planet spheres are ground from natural stones that resemble each planet they represent: the Sun is yellow Mexican calcite; Mercury is composed of meteorite; Venus is orange calcite; Earth is Chilean lapis; Mars is Jasper; Jupiter is banded sandstone; and Saturn is banded onyx. The Orrery needs to perform one revolution of the calculation-mechanism every 12 hours to keep the planets updated. Most of the large wheels and sliders revolve on a series of vee rollers that can be changed even when the parts are moving. All the bearings in the Orrery are designed to be "hot-swapped", which means that the mechanism does not have to be taken apart to replace them.