In 02008, Warren Buffett placed a Long Bet that will take until 02017 to resolve. He predicted that for those ten years, “the S & P 500 will outperform a portfolio of funds of hedge funds, when performance is measured on a basis net of fees, costs and expenses.”

Below is a summary of how things went in the seventh year of this Bet, as published by Fortune Magazine: 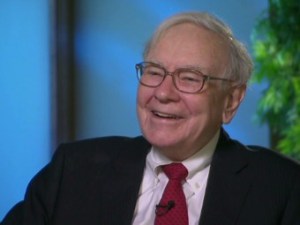 Results are in for the seventh year of what’s sometimes called The Million-Dollar Bet—Warren Buffett’s 10-year wager that the S&P 500 would outperform a sampling of hedge funds—and, for now at least, it’s looking like a rout for the CEO of Berkshire Hathaway.

Under the terms of the wager, Buffett is betting (with his own money, not Berkshire’s) on the stock market performance of an S&P 500 index fund while Protégé Partners, a New York money manager, is banking on five funds of hedge funds (the names of which have never been publicly disclosed) that Protégé carefully picked at the outset. Through the seven years, Vanguard’s 500 index fund, as represented by its Admiral shares, is up 63.5%. That’s the portfolio carrying Buffett’s colors. Protégé’s five hedge funds of funds are, on the average—the marker the bet uses—up an estimated 19.6%. (The “estimated” takes into account that not all of the five funds have final figures for 2014).

A charity of the winner’s choice will receive $1 million—or more, which we’ll get to in a moment—at the bet’s end.

This was the sixth straight year that the contest has tilted in Buffett’s direction: The Admiral shares were up 13.6% in 2014 and the average gain for the funds of funds was 5.6%. Only in the first year of the bet—which began in 2008, a year that was a train wreck for both the economy and the stock market—did the funds of funds win, so to speak. They were down, on average, only 24%. The Admiral shares plummeted by 37% that year.

In Fortune (which exclusively wrote about the beginning of the bet in 2008 and has since annually made public how the bet stands), Buffett pictured himself after the 2008 tumult as a tortoise, up against a hare. Since then, Buffett has stuck to the plot of the Aesop fable and methodically moved ahead of his rival.

With only three years left in the bet, is there a scenario that would leave Protégé closing the yawning gap and winning? One scenario, maybe, and it is articulated by Ted Seides, the Protégé partner who in 2007 negotiated the bet with Buffett (after Buffett, in a speech, threw out a challenge to the hedge-fund world). Says Seides: “The odds now are that we’ll need to see a severe market contraction for our side of the ledger to stage an epic comeback.”

And he adds the deeper meaning of such a contraction. “One lesson from 2008 is that no one wins when that occurs,” says Seides.

To amend that statement only slightly, this contest will definitely have one certain winner: The charity that gets the proceeds of the bet. The odds say that will be Girls Inc. of Omaha, which Buffett designated to get the money if he emerged the victor.

The amount handed over, though, is not likely to be $1 million, because of changes that Buffett and Protégé made in the wager a couple of years ago. The original bet stipulated that each side in the bet would put up $320,000 to be invested in a zero-coupon bond that after 10 years would be worth $1 million. Thus the name of the bet.

But, when the recession hit, interest rates went down so insistently—which sent zero-coupon bonds up—that the valuation of the bond that Buffett and Protégé bought was by the fall of 2012 very close to the promised land of $1 million.

The two contenders then agreed that the bond would be immediately liquidated and the proceeds put into the B stock of the company that Buffett heads, Berkshire Hathaway. Buffett also issued a guarantee: He will pay the winning charity $1 million if the Berkshire stock bought isn’t worth that much at the bet’s end.

That’s a tough figure for headline writers to handle. In its annual rundown, Fortune will probably stick to the “Million-Dollar Bet,” even as that description—for the minute, at least—understates the case.

Carol J. Loomis, who retired recently from Fortune as a senior editor-at-large, is a long-time friend of Warren Buffett’s, a Berkshire Hathaway shareholder, and editor of Buffett’s annual letter to shareholders.