We live in an era of mass extinction of linguistic heritage. Thousands of years of ancestral knowledge and stories are vanishing with the last speakers of hundreds of languages. Come and find out how mobile devices and social media are being used to preserve the “wisdom of the tribe” for generations far into the future.

Linguists worldwide are engaged in an urgent task of recording the world’s languages while there is still time. Oral cultures are in particular jeopardy because they lack a written record. However, the languages are disappearing more quickly than they can be preserved, and so a new effort is trying to ramp up the effort using mobile technologies.

Steven Bird, a linguist and anthologist who spoke for us at The Interval in November 02014 has been testing a new mobile app in Amazonia, Melanesia, and Central Asia. The app, called Aikuma, has been designed by Steven and his team to permit people who speak endangered languages to record and translate their stories and songs. When Steven visited The Interval, he ran a hands-on demonstration of the app, facilitated a discussion of some thorny issues it raised, and shared some of his ingenious solutions. In this recent interview with the Australian Broadcasting Company, Steven Bird explains how the app works and how it can be used to save endangered languages. 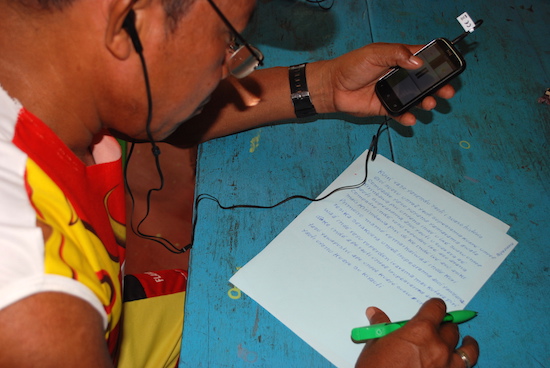 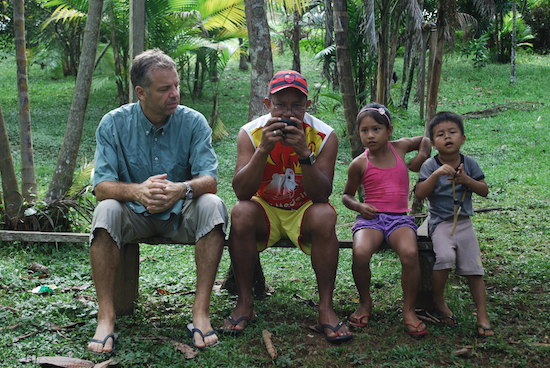 The above photos are from the village of Terra Preta, near Manaus, in the heart of the Brazilian Amazon. Steven’s team worked with local speakers of the Nhengatu language to record, translate, and transcribe the stories of the rainforest. One of the products is a story book illustrated by the children of the village, which has been uploaded to the Internet Archive where anyone can access it.

Steven Bird is a Senior Research Associate at the Linguistic Data Consortium at UPenn and Associate Professor of Computing and Information Systems at the University of Melbourne, Australia. He travels extensively to remote indigenous communities and through a variety of projects he works to bring the power of technology to bear on efforts to preserve the world’s endangered languages.