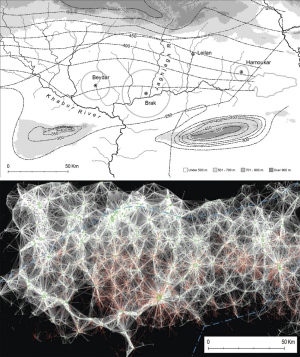 It seems that our ancestors left behind a bit more than the pyramids and temples we still enjoy today.

Using satellite photos and digital mapping technology, a group of archaeologists has discovered traces of ancient life on a much smaller scale. A recent article in Nature reported on the finding, quoting one of the study’s researchers:

“Traditional archaeology goes straight to the biggest features – the palaces or cities – but we tend to ignore the settlements at the other end of the social spectrum,” says Jason Ur, an archaeologist at Harvard University in Cambridge, Massachusetts, who is co-author of the study. “The people who migrated to cities came from somewhere; we have to put these people back on the map.”

Rather than palaces, these rural communities have left their mark in the form of “anthrosols.” Think of these as a type of footprints: anthrosol is soil that has been altered by the presence of human life. Communities built mud-brick houses, left behind organic waste, and fertilized agricultural fields – all of which brought about a permanent change in the makeup and texture of the soil.

To see these footprints, you may need an archaeologist’s eye – or alternatively, a spy satellite. Developing new imaging technology and methods for digital analysis, this group of archaeologists has been able to use satellite photos not only to map patterns of small-scale settlement, but also to measure the size of these ancient communities. This virtual form of archaeology promises to revolutionize the field, and has already drawn into question a few stalwart theories about the dynamics of urbanization.

It’s a new way of chronicling the history of civilization, reminding us that our legacy is not just told through books and architecture; it’s written in the earth.