“The library is safe thanks to Egypt’s youth” 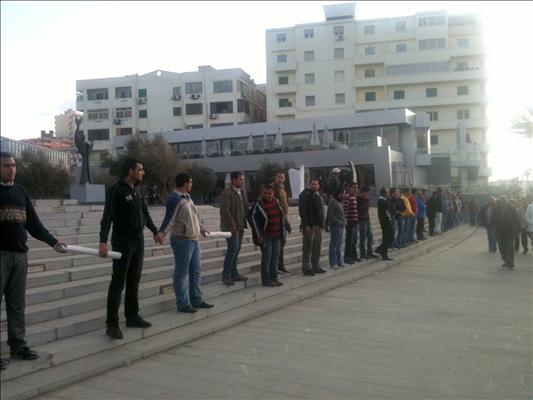 The famous burning of the Library of Alexandria is still considered to be one the greatest losses of ancient culture.  History tells us it was actually several events that eventually destroyed the library. Events similar to the ones we have witnessed over the last few weeks in Egypt. Recent losses at national libraries and museums in Serbia, Iraq, and now Cairo show that in times of upheaval, there is a strong desire to erase the past, and that past often resides in libraries.  One of Long Now’s board members is Mike Keller the head of Stanford libraries who has close ties with the modern Library at Alexanderia.  We have all been waiting to hear how the library fared in the revolution, see the encouraging report below:

Stanford Libraries have a close collegial relationship with the new Library of Alexandria, known as the Bibliotheca Alexandrina, or BA. We have been anxiously watching the news of turmoil in Egypt with a particular concern about that inspiring institution (to say nothing of other cultural repositories, some of which were damaged in recent weeks). I am truly delighted and relieved to report that the BA is intact as of this writing. Indeed, some 50 volunteers formed a human cordon to protect and support it during mass demonstrations in its vicinity on the Corniche of that historic city. Even when all of Egypt was reportedly cut off from the Internet, the BA retained connectivity through its own international network, and its director, Dr. Ismail Seregeldin, was able to post several assuring messages to the BA’s friends around the world, complete with photographs and video showing how Alexandrians rallied to protect it. Concurrently, several of us at Stanford were exchanging messages with our friends there, which provided solace all around.
None of this predicts how the BA will fare hereafter. During the turmoil on the streets, one of the BA’s senior staff closed a message to me as follows: “Pray for us.” That may still be about all we can do. As momentous events unfold in a post-Mubarak Egypt, we will look for more tangible ways to express our support and solidarity.

As a parting thought: as implausible as mass insurrection seems here, if something somehow comparable were to happen, would we put ourselves on the line to protect our libraries as did the citizens of Alexandria?