It may take a village to raise a child, but it takes an entire civilization to build a toaster.

That’s what Designer Thomas Thwaites learned when he set himself the challenge of building his own, from start to Pop Tarts. He smelted ore, coaxed plastic out of oil, and toiled towards a prototype that worked for a total of thirty seconds.

Long Now board member Kevin Kelly, in a 02014 SALT Talk on the technium, said that Thwaites’ project reveals the deeply interconnected and dependent nature of the technologies that make up our modern world:

British astrobiologist Lewis Dartnell, who spoke at The Interval in 02015  and provided his expertise for the Manual for Civilization, uses thought experiments grounded in global catastrophe to explore the depth of our dependence on these technologies—and their dependence on one another. If the world as we know it were to end tomorrow, he asks, what would be necessary to rebuild key features of civilization like agriculture, communication, transportation, and medicine? How far could such a post-apocalyptic society get?

A recent Darnell thought experiment, published in Aeon, broaches one of the technologies modern civilization depends on most, but whose resources are fast depleting: fossil fuels.

It’s easy to underestimate our current dependence on fossil fuels. In everyday life, their most visible use is the petrol or diesel pumped into the vehicles that fill our roads, and the coal and natural gas which fire the power stations that electrify our modern lives. But we also rely on a range of different industrial materials, and in most cases, high temperatures are required to transform the stuff we dig out of the ground or harvest from the landscape into something useful. You can’t smelt metal, make glass, roast the ingredients of concrete, or synthesise artificial fertiliser without a lot of heat. It is fossil fuels – coal, gas and oil – that provide most of this thermal energy.

Is the emergence of a technologically advanced civilisation necessarily contingent on the easy availability of ancient energy? Is it possible to build an industrialised civilisation without fossil fuels? 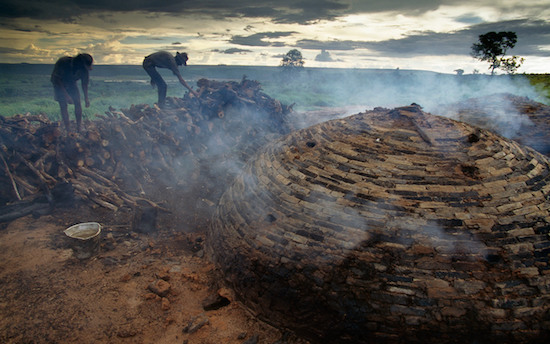 Charcoal production in Brazil. Photo by Franz Lanting/Getty. Via Aeon.

Dartnell’s answer is: “maybe – but it would be extremely difficult.” Our best bet, he concludes, may be a combination of burning wood for fuel and using renewable energy for electricity, which would only work if the population were sufficiently small in size. But, Dartnell says, there’s a catch:

These options all presuppose that our survivors are able to construct efficient steam turbines, CHP stations and internal combustion engines. We know how to do all that, of course – but in the event of a civilisational collapse, who is to say that the knowledge won’t be lost? And if it is, what are the chances that our descendants could reconstruct it?

The question of what knowledge is essential to sustain or rebuild civilization inspired the Long Now to start the Manual For Civilization. Alexander Rose, Executive Director of Long Now, believes there’s more to the problem than just knowing how to remake a technology like steam turbines.

“After the fall of the great Egyptian, Mayan, and Roman empires we had evidence and examples of their engineering achievements all around us,” he said. “But aqueducts or senate buildings are worthless without a society around them to maintain, contextualize, and protect them.”

You can read Lewis Dartnell’s Aeon article on rebooting civilization without fossil fuels in full here. Dartnell’s latest book, The Knowledge: How to Rebuild Civilization in the Aftermath of a Cataclysm, is available here.  For more information on his thought experiment on the behind-the-scenes fundamentals of how our world works and how you could reboot civilization from scratch visit www.the-knowledge.org