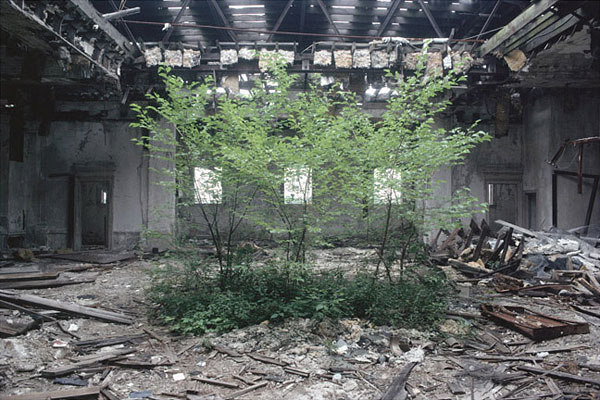 I often receive emails about creating a record of humanity and technology that would help restart civilization.  We have often worked on projects that may be a part of what we call The Manual For Civilization.  It is an interesting thought exercise to ask yourself what information you might want if you had to truly start over.  A recent example is email that came in which was inspired by an essay that James Lovelock published in Science in 1998 called A Book For All Seasons (excerpt):

We have confidence in our science-based civilization and think it has tenure. In so doing, I think we fail to distinguish between the life-span of civilizations and that of our species. In fact, civilizations are ephemeral compared with species. Humans have lasted at least a million years, but there have been 30 civilizations in the past 5000 years. Humans are tough and will survive; civilizations are fragile. It seems clear to me that we are not evolving in intelligence, not becoming true Homo sapiens. Indeed there is little evidence that our individual intelligence has improved through the 5000 years of recorded history.

Over the years these proposals have been in different forms; create a book, set of books, stone tablets, micro-etched metal disk, or a constantly updated wiki.  I really like the idea of creating such a record, in fact the Rosetta Disk project was our first effort in this direction.  These Doomsday Manuals are a positive step in the direction of making a softer landing for a possible collapse, and the people creating them (like ourselves) are certainly out to help people.  It took millennia for the world to regain the technology and levels of societal organization attained by the Romans, so maybe a book like this would help that.

However it also seems that these efforts tap a romantic notion that we would all love to find something like this book from a past or otherwise alien civilization.  My worry is that it also feeds off a (likely incorrect) feeling that somehow collapse might be a fun challenge to live through, and that everyone kind of wants to be the monk in A Canticle For Leibowitz or Mel Gibson in Road Warrior.

My bet is that the reality of watching your civilization (and population) collapse is likely one of the worst things anyone could experience.  I am also not so sure the problem is just knowing how to remake a technology.  For instance after the fall of the great Egyptian, Mayan, and Roman empires we had evidence and examples of their engineering achievements all around us.  But aqueducts or senate buildings are worthless without a society around them to maintain, contextualize and protect them.

It is also worth pointing out that there are likely well over a billion people on earth who currently don’t interact with formal economies or technological society at all.  They will be very well adapted to a post collapse world, you should find some and make friends.  They will likely be far more helpful than a manual on restarting the internet, because they know how to gut a deer.

In any case I thought I would create this blog post which I will try and keep updated as these proposals and efforts come to me (and hopefully come to fruition).  I will also list some of the resources that I usually refer to when I get these inquiries.   Please note these resources are extremely biased toward the English language, the United States and Western culture.  Also note that one of the first things that comes up when creating any compendium style work is the issue of copyright.  It might sound ridiculous that you might worry about copyright in a doomsday manual, but if you want to publish it and get it into peoples hands before the apocalypse, you are going to have to deal with it in some way. Please feel free to use the comments field to make suggestions and pointers and I will integrate them here as well.

Projects that are attempts in this direction:

Content that has been discussed to be used for these projects: