Predictify seems to be combining social networking, message board discussion, pay-per-post business models and Wikipedia-style collective wisdom into a harmonious online community of eager questioners and knowledgeable, astute predictors, all united to discuss deterministic questions about the future, share knowledge, and act on the results.

Because mob rule *totally* works on the internet. 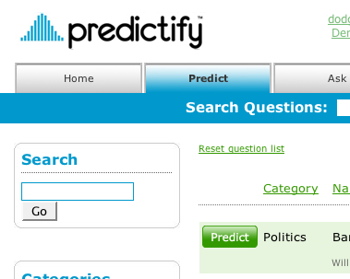 With Predictify, registered users can read questions posed by questioners, pose their own questions, predict answers, and repeatedly smack down internet smart-alecks who try to use the site for betting, insider trading, and making off-color predictions about their dorm roommate’s luck with the opposite sex during the upcoming weekend.

Theoretically, predictors also get paid every time their predictions are correct. Questioners can pay a premium based on the number of responses which in turn entitle them to collect value tables for a given question, collect larger data sample sets and keep a running tally of private data if they so desire. The pot is shared out among the predictors who nailed the question most accurately and soonest, according to rank, expertise level, phase of the moon, etc etc.

The site includes live news feeds relevant to the question being discussed. Gimmicks like community points, reputation rankings, and “private prediction environments for you and your friends” trigger that social network addict’s instinct to refresh the page every thirteen seconds.

Since this is what we do for fun around here at The Long Now, it sounds like a grand time to me.

In a scarcity mindset, growth is limited by resources. In an abundance mindset, it is limited only by our ingenuity.