The New Yorker recently profiled photographer, former SALT speaker, and 02016 sponsor of the Conversations at the Interval livestream Edward Burtynsky and his quest to document a changing planet in the anthropocene age.

“What I am interested in is how to describe large-scale human systems that impress themselves upon the land,” Burtynsky told New Yorker staff writer Raffi Khatchadourian as they surveyed the decimated, oil-covered landscapes of Lagos, Nigeria from a helicopter.

For over three decades, Edward Burtynsky has been taking large-format photographs of industrial landscapes which include mining locations around the globe and the building of Three Gorges Dam in China. His work has been noted for beautiful images which are often at odds with their subject’s negative environmental impacts. 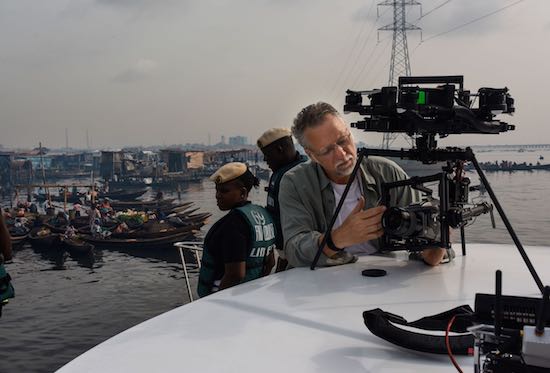 Photograph by Benedicte Kurzen / Noor for The New Yorker

“This is the sublime of our time,” said Burtynsky in his 02008 SALT Talk, which included a formal proposal for a permanent art gallery in the chamber that encloses the 10,000-year Clock, as well as the results of his research into methods of capturing images that might have the best chance to survive in the long-term.

As the Khatchadourian notes, Burtynsky’s approach has at times attracted controversy:

Over the years, greater skepticism has been voiced about […] Burtynsky’s inclination to depict toxic landscapes in visually arresting terms. A critic responding to “Oil” wondered whether the fusing of beauty with monumentalism, of extreme photographic detachment with extreme ecological damage, could trigger only apathy as a response. [Curator] Paul Roth had a different view: “Maybe these people are a bit immune to the sublime—being terribly anxious while also being attracted to the beauty of an image.”

Burtynsky does not seek to be heavy-handed or pedantic in his work, but neither does he seek to be amoral. The environmental and human rights issues are directly shown, rather than explicitly proclaimed.

In recent years Burtynsky’s work has focused on water, including oil spills around the world, like the ones he was documenting in Lagos, a city he calls a “hyper crucible of globalism.”

As the global consequences of human activity have become unmistakably pressing, Burtynsky has connected his photography more directly with environmentalism. “There has been a discussion for a long time about climate change, but we don’t seem to be ceasing anything,” he says. “That has begun to bring a sense of urgency to me.”

Burtynsky is currently working on the film Anthropocene, which documents unprecedented human impact on the natural world.

Read The New Yorker profile of Burtynsky in full.