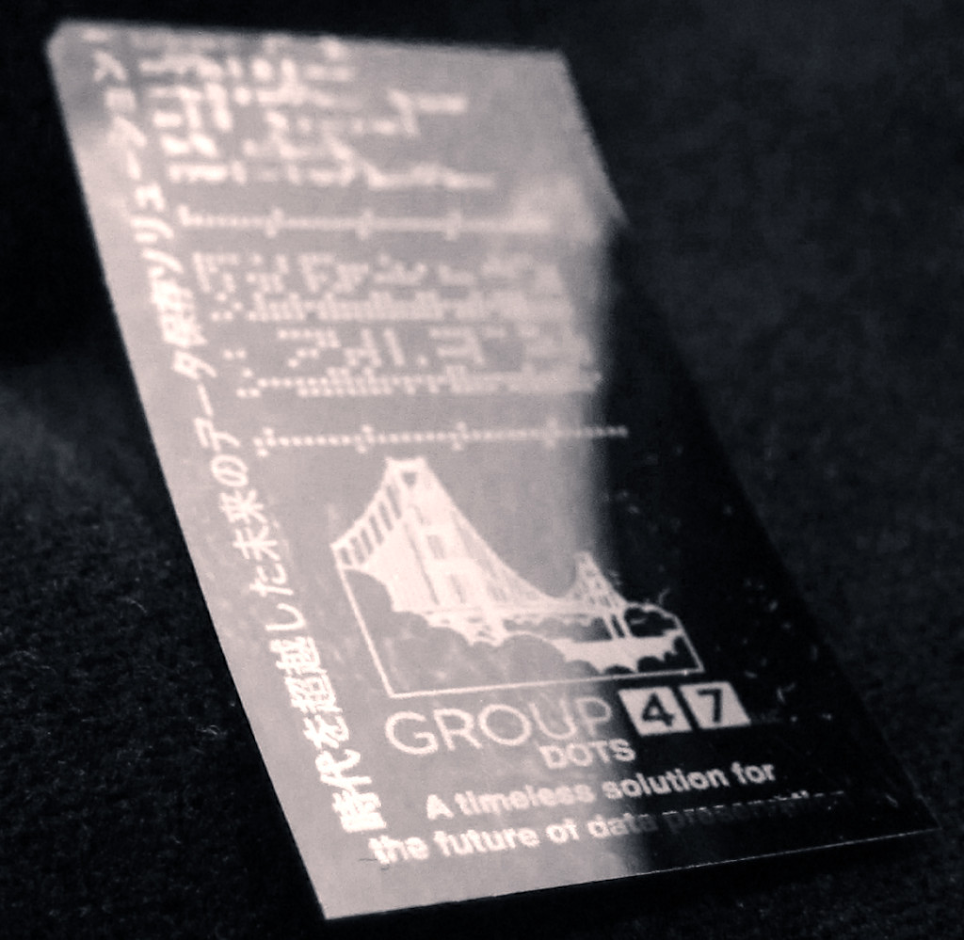 Via Alexis Madrigal’s TinyLetter, Real Future, DOTS is a Digital Optical Technology System developed by Eastman Kodak in the 01990s, and abandoned in 02002. In 02008, a team of digital imaging experts and former Kodak employees founded Group 47 to buy the DOTS patents and continue development. They succeeded in 02011.

Unlike magnetic and optical storage solutions, which must be protected from data corruption, physical degradation, and environmental damage, DOTS physically encodes data on an archival tape coated in a phase-change alloy. The alloy is resistant to temperature extremes, electromagnetic pulses, and other common environmental hazards (though it is vulnerable to acids—including, apparently, Sprite), while the tape itself is made of archival materials.

Just as importantly, DOTS is also meant to withstand the onset of a digital dark age. The data, which may include words and images as well as digitally encoded information, is transferred to the alloy using a laser, which changes the alloy’s index of refraction. In other words, the blank portions of the tape are shiny, while the data-bearing portions are dull. The result, though written at a microscopic scale, is visible under normal magnification.

Each tape begins with a Rosetta Leader(TM)—a human-readable, microfiche-scale, page that explains the storage format, and includes instructions for building a DOTS reader. According to Group 47 president Rob Hummel, even if there were no way to build the reader, it would be possible to decode the data using nothing more than the instructions in the Rosetta Leader and a camera. “While it would be very tedious,” he says in a video describing the system, “at least it wouldn’t be impossible.”

In tests, DOTS has been shown to remain archival for at least 100 years—short enough, as long-term thinking goes, but far longer than magnetic tape storage or the always-evolving hardware needed to read current digital storage media. As the Group 47 website notes, “Competing technologies (magnetic tape, hard drives) require a complex and expensive system of data migration within five years, as, beyond this, there is an unacceptably high probability of data loss due to catastrophic media and/or data degradation or outright failure.”