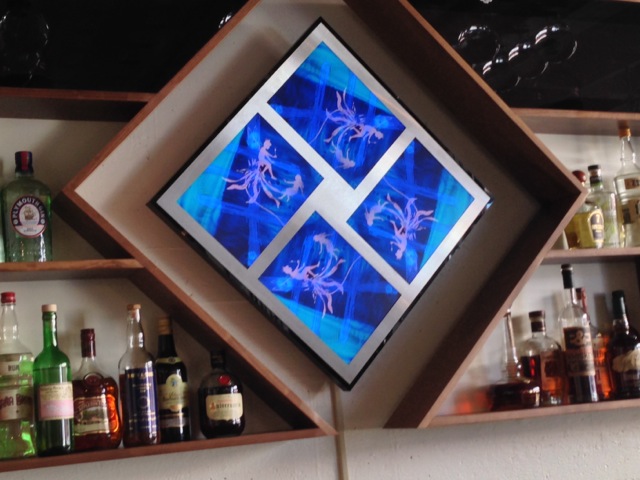 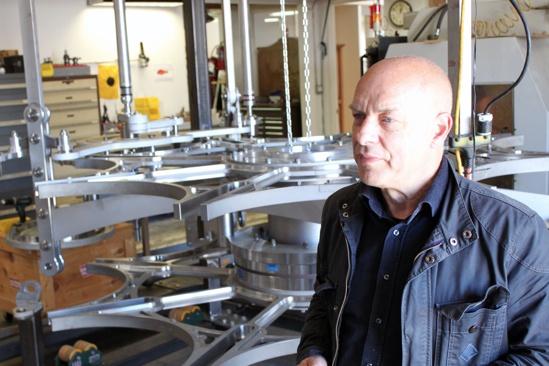 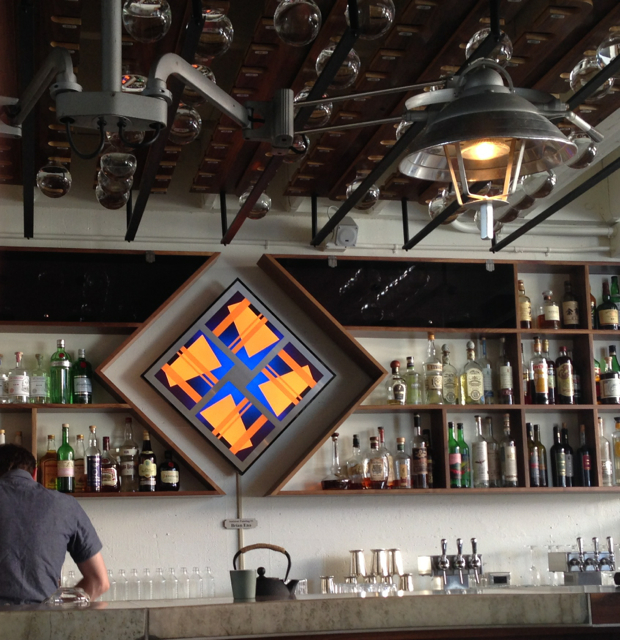 In July of 02013 Brian Eno visited the Bay Area and saw the latest progress on the 10,000 Year Clock project. Clock designer Danny Hillis gave Brian a tour of the progress at the Long Now Clock assembly space (where these photos were taken.) 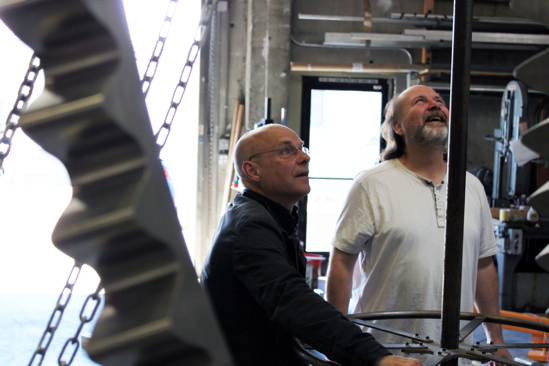 Brian Eno confirmed on this visit that he is designing the ambient sound for The Interval at Long Now as well as a dedicated light-painting installation for the space. We are thrilled that Brian will be creating these one-of-a-kind works for our new venue. The Interval is intended to be a place that inspires conversations, and Brian’s sound and lightscape designs will be key elements to creating that atmosphere.

After rising to fame in the British pop music scene of the early 1970’s with Roxy Music and a series of acclaimed solo albums, Brian Eno made his mark as a producer working with such artists as David Bowie, the Talking Heads, U2, Coldplay and many more. Along the way he coined the term “Ambient Music” and made the recordings that eventually defined the genre.

In recent years he has increasingly focused on generative sound and visual art. His 77 Million Paintings software creates a slow, constantly evolving series of light-paintings with an ever-changing ambient sound and lightscape. Brian has released this type of algorithmically-driven digital work both as mobile apps and projected to monumental scale on the sails of the Sydney Opera House (below).

Brian was amongst the first people with whom Danny Hillis discussed his idea to design a clock that would run for 10,000 years. The Clock and the process of building it are intended as an inspiring example of long-term thinking. From Danny’s 01995 article in Wired, announcing “The Millennium Clock”: 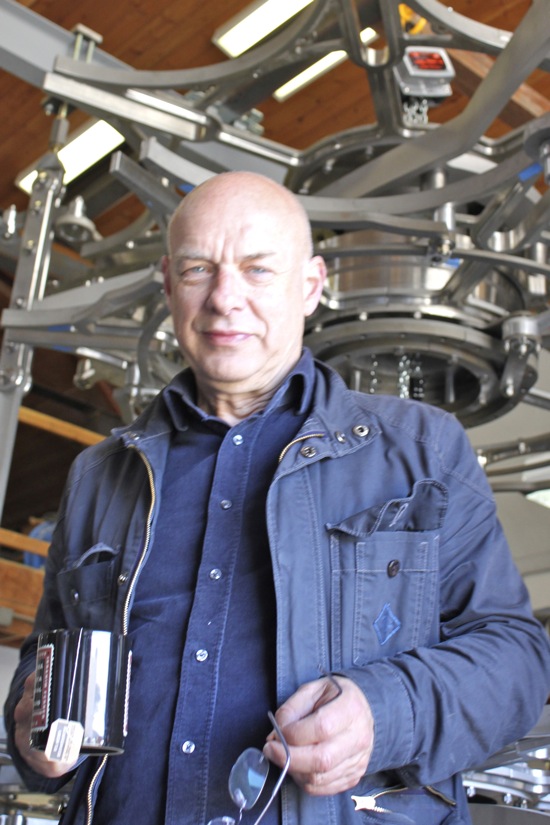 When I tell my friends about the millennium clock, either they get it or they don’t. Most of them assume I’m not serious, or if I am, I must be having a midlife crisis. (That’s nice, Danny, but why can’t you just write a computer program to do the same thing? Or, Maybe you should start another company instead.)

My writer friend, Stewart Brand, starts thinking about the organization that will take care of the clock. It’s a Rorschach test – of time. Peter Gabriel, the musician, thinks the clock should be alive, like a garden, counting the seasons with short-lived flowers, counting the years with sequoias and bristlecone pines. Artist Brian Eno felt it should have a name, so he gave it one: The Clock of the Long Now.

After giving the Clock its name, Brian joined the Board of Directors of Long Now at the time of our founding as a non-profit in 01996. He continues to serve on our Board, and we thank him for his generosity in creating art and music for us to share at The Interval.

Brian has built a limited set of “ambient paintings”, and we are honored that he donated the one shown here to be placed behind our bar at The Interval. It is the only example of Brian’s generative light work in America, and the only ambient painting of his that is currently on permanent public display anywhere. 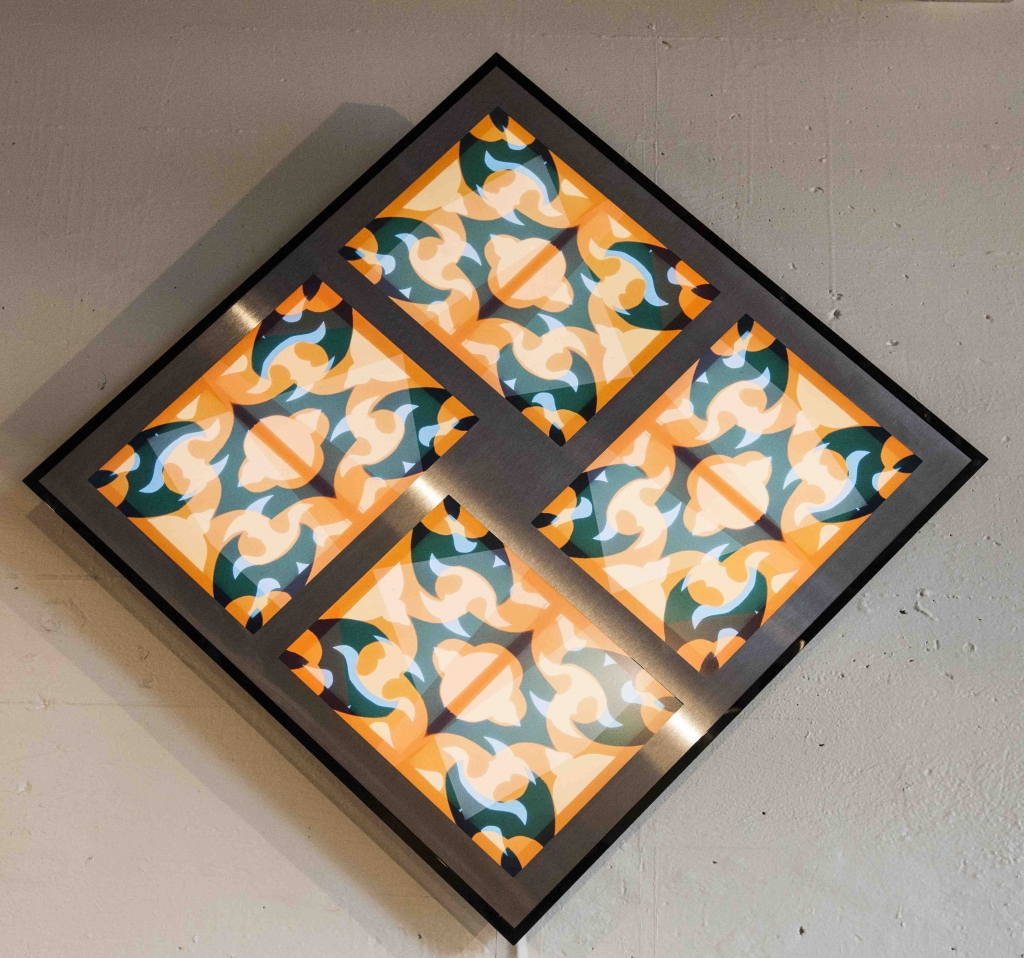 We are proud to provide a home for Brian’s art where it can be appreciated by everyone including Long Now’s members. You’ll find more images of the ambient painting here.

Our thanks to everyone who supported and helped us build The Interval! We hope you will come visit us soon and see Brian Eno’s art in person. 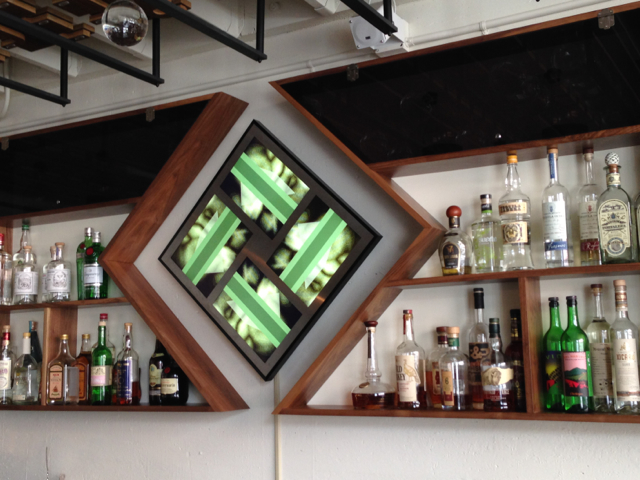