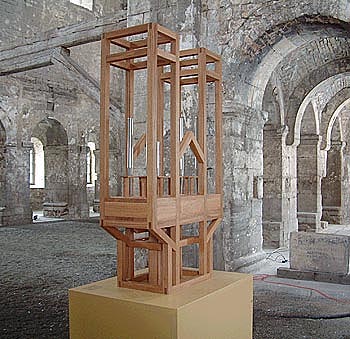 Fair warning for long-term music lovers: the world’s slowest concert, a 639-year organ piece by American avant-garde composer John Cage (01912-01992), will next change notes in just over a month’s time, on 5 November 02008.

St Burchardi church, in the eastern German city of Halberstadt, has played host to the performance since 5 September 02001 (the late composer’s 89th birthday), when it kicked off with 17 months of silence. Cage originally wrote ASLSP (As SLow aS Possible) in 01985. Its maiden performance by organist Gerd Zacher lasted 29 minutes, but Cage didn’t specify a maximum, so in accordance with the piece’s title, musical scholars and scholarly musicians since decided to stage a multi-century version, approximating the lifespan of an organ.

According to a New York Times report on the 5 May 02006 note change, the odd duration and location for this ambitious project, called Organ²/ASLSP, are due to Halberstadt’s cathedral claiming the first organ with a modern keyboard arrangement, built in 01361, 639 years before 02000, the intended start date for the performance. The sustained notes of the performance are possible thanks to the organ’s customised bellows, and tiny sandbags on strings, rigged to hold each note as long as necessary.

The upcoming change will be the seventh chord in the piece. The last change, on 5 July 02008, attracted over one thousand slow-music fans.

Blind writer Ryan Knighton was among those present for the previous occasion, on 5 May 02006 (note changes are always on the 5th of the month). In a short but beautifully written article, he recounts his pilgrimage to the Halberstadt organ, as one of the long, tranquil stretches between increasingly note changes draws to a close:

After a few moments standing here, I begin to crave the next note — any note, any change whatsoever. The chord fills my ears, and a kind of audio-claustrophobia overwhelms me. No sightseers or tour guides around to offer any reprieve. Nobody except Justus, an eleven-year-old local boy who took my hand and guided me the final hundred yards to hear this particular sound before it changed. Lucky he was there — once the new chord begins tomorrow, it won’t change again for more than two years. Got to get to church on time.
…
As I move into the monastery and toward the organ, the familiar clicking of my white cane adds texture to the drone. My own noise feels like blasphemy, chatter during a prayer. Granted, this chord has been playing only four months — a frilly little trill in the scheme of things — but that’s no licence for irreverence. I stop again and listen. Perhaps ten minutes have passed, and I’m becoming aware of the chord’s impurities. The faintest blemishes in tone pop and burn away like sparks. The sound heaves and exhales slightly, like the sigh or groan of a weary traveller.

Sighted folks ramble the world to see Grand Canyons and Eiffel Towers, monuments that dazzle the eyes. Because the last bit of my sight could desert me any day now, I asked myself, what would the equivalent pilgrimage be for me? So a white cane tapped its way from Vancouver to Toronto to Berlin and to Halberstadt to hear a single moment out of centuries of sound. One thing giving way to another — the basis of all drama. It seemed monumental to me.

I’m standing in front of the organ now, and what began as noise has become a familiar hum. As I think of the generations who will take care of a song that assumed they would be there to keep it going, I’m reminded of my debt to Justus and everyone else who guided me here. As this song will be, I’ve been passed along from one person to another, slowly, until I made it. Just in time.

In case you happen to be unavailable for the upcoming November change, you might pencil in a visit to Halbertstadt for February 02009, or July 02010.

Incidentally, Organ²/ASLSP is the subject of Prediction 282, registered with Long Bets in 02007; that the performance will continue uninterrupted to the halfway mark, in the year 02319. Although a clear majority of folks weighing in on the issue have disagreed (18 doubters vs 8 supporters to date), the proposition is yet to find an official Challenger to turn it into a fully-fledged Long Bet.

(Thanks to William Kramer for the lead.)