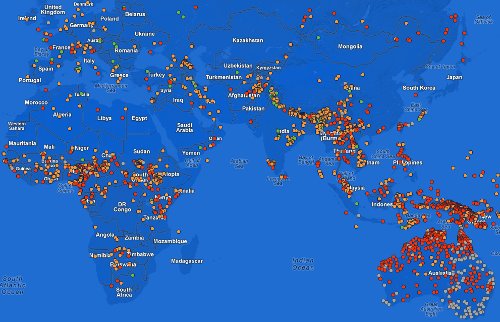 ELCat uses the metaphor of biodiversity to illustrate the gravity of the loss of an entire language family: If we compare the extinction of a language to the extinction of an animal species, the death of a language family would equal the loss of a whole branch of the animal kingdom, for example all felines.[4] We know of a hundred language families that have gone extinct over the course of history – 24% of the world’s linguistic diversity. But the fact that 28 of them have gone extinct over the relatively short time span of the last 50 years is symptomatic of the accelerated rate of language loss we are experiencing in recent times.

The Endangered Languages Catalogue (ELCat) “aims to compile a comprehensive up-to-date catalogue on all languages considered to be in danger.” At the 3rd International Conference on Language Documentation & Conservation (ICLDC 3) earlier in 02013, ELCat’s director presented several years’ worth of research, including the above facts.

Beyond those that we’ve already lost, ELCat has found that 457 languages – almost 10% of humanity’s living languages – are spoken by just 10 or fewer people and are on the brink of extinction, while 3,176 – almost half – are endangered. In fact, ELCat puts the current rate of linguistic extinction at about one language every three months.

Learn more, including what people are doing about it, on the Rosetta Blog.