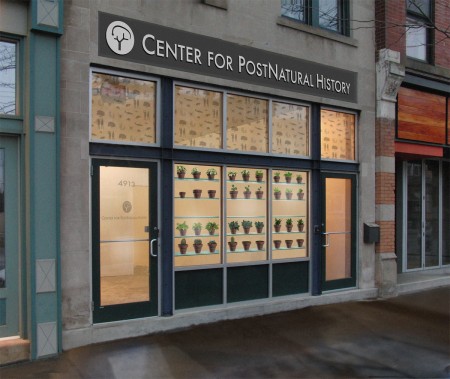 Brought to our attention by BoingBoing, the Center for PostNatural History specializes in specimens that are unlikely to be on display at, say, the American Museum of Natural History. As its name implies, the Center features organisms that are ‘unnatural,’ in that they were produced or altered by human activity. If we are, as some have suggested, entering a new epoch where the earth is sufficiently affected by humans so as to elicit the name ‘Anthropocene,’ then this museum could be the first of many to exhibit its characteristic life-forms. As its website explains,

The Center for PostNatural History is dedicated to the advancement of knowledge relating to the complex interplay between culture, nature and biotechnology. The PostNatural  refers to living organisms that have been altered through processes such as selective breeding or  genetic engineering. The mission of the Center for PostNatural History is to acquire, interpret and provide access to a collection of living, preserved and documented organisms of postnatural origin.

Every organism in an ecosystem, of course, exists in a network of constantly interacting relationships, so the idea that the effects of our species on other organisms are somehow ‘unnatural’ is debatable. But the idea of the “PostNatural” dovetails nicely with Bill McKibben’s “End of Nature,” referring not to a true absence of nature, but to a world in which human influence reaches ever more deeply into the biology of our planet.

And the nature of that influence is not really clear – what will be its long-term effects? How will people choose to utilize biotechnology? At the very least we can take notes as we go. Given that the vast majority of the species on our planet are not yet described by scientists, it is encouraging that the goals of the Center for PostNatural History include “the maintenance of a unique catalog of living, preserved and documented specimens of postnatural origin.”