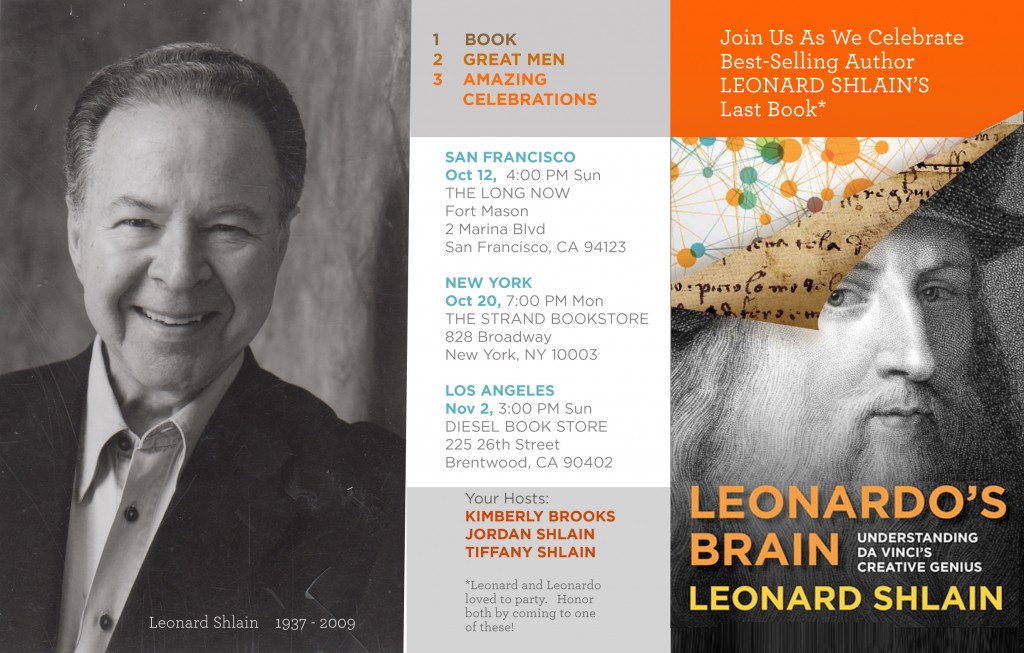 This Sunday, October 12, The Interval hosts a special event to celebrate the posthumous release of Leonardo’s Brain: Understanding Da Vinci’s Creative Genius by Leonard Shlain. Leonardo’s Brain looks at the life, art and mind of 15th century Florentine polymath Leonardo da Vinci. Shlain’s book considers Da Vinci as a glimpse into the future of what our species can become; it was completed shortly before Dr. Shlain’s death in 02009.

The event will feature readings by Leonard Shlain’s three children who were instrumental in bringing his final book to publication: Kimberly Brooks, artist and founding editor of the Arts and Science Section of the Huffington Post; Jordan Shlain, doctor and founder of Healthloop.com; and Tiffany Shlain, Emmy-nominated filmmaker, founder of The Webby Awards and director of the show “The Future Starts Here.”

Dr. Shlain’s books including “Leonardo’s Brain” will be on sale throughout the day

NOTE: this is Fleet Week in San Francisco, with an air show featuring the Blue Angels on Sunday (12:30-4pm) prior to our 5pm program. The Marina and Fort Mason are great places to watch the show, before or after coming by The Interval.

Praise for Leonardo’s Brain and the work of Leonard Shlain:

“By exploring Leonardo da Vinci’s brain through the lens of contemporary neuroscience, Leonard Shlain not only celebrates da Vinci’s legendary creativity, he shows how we can integrate and strengthen both sides of our minds and tap into the amazing possibilities within ourselves.” —Arianna Huffington

“Shlain’s ability to synthesize not only information but also genuine wisdom across multiple and disparate disciplines was extraordinary.” —Al Gore

“This book is a gift from the heavens where Leonard Shlain is today and another bright example of his force and spirit shining through the prism of the mind of Leonardo da Vinci.” —Norman Lear

Leonard Shlain was an author, inventor and surgeon. His books take a long view across time and include the best-selling titles Art & Physics, Alphabet vs. The Goddess and Sex, Time, and Power.

This is the first of 3 events around the country marking the release of Leonard Shlain’s final book. The others are in New York City on October 20th and Los Angeles, November 2nd.