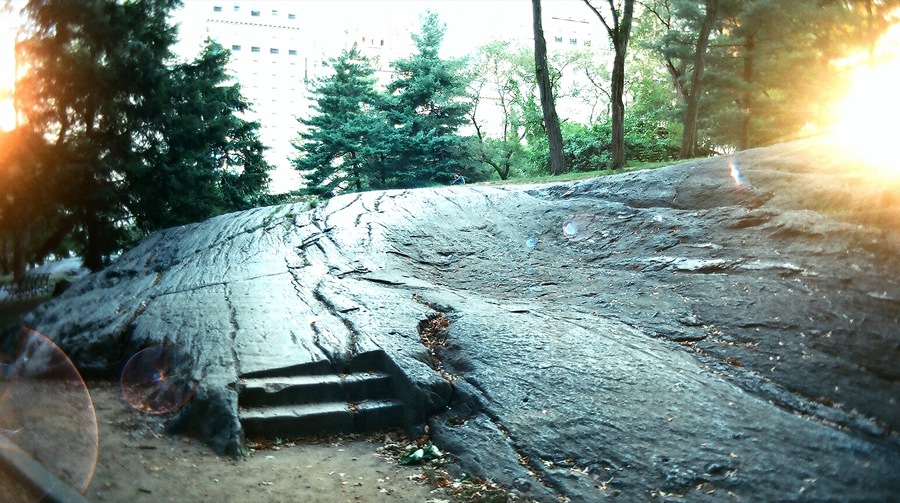 In The Life and Death of Buildings: On Photography and Time Joel Smith writes:

Imagine making a picture using film so insensitive to light – so slow, in photographic parlance – that to burn an image onto it required an exposure of twenty-five centuries. Geologically speaking, the blink of an eye. The picture from that negative would reveal a world made of stone, and stone only. It would be a world where plants and people, seasons and civilizations, had come and gone, quite untouched, and unbothered, by mankind. And yet, here it is, a world, unmistakably shaped by human hands.

Perhaps one of humanity’s greatest weaknesses is that our power of imagination tends to be dwarfed by our power of transformation. Twenty-five centuries ago, Rome was little more than a small town; Confucius had just resigned from his government post; Olmec society had slid into decline; and none of the languages we speak today had yet evolved. Entire civilizations rise and fall within the blink of a geologic eye – and whether as cause or consequence, we have a collective attention span to match.

We might be able to stretch our sense of “our time” a century or two into the past and future, but anything beyond that feels so far away that it dissolves into (seeming) irrelevance. As a result, we often don’t realize that our contemporary world is significantly shaped by the geological worlds that came before it; and that the fruits of our short-term pursuits can far outlast our own physical existence on Earth. 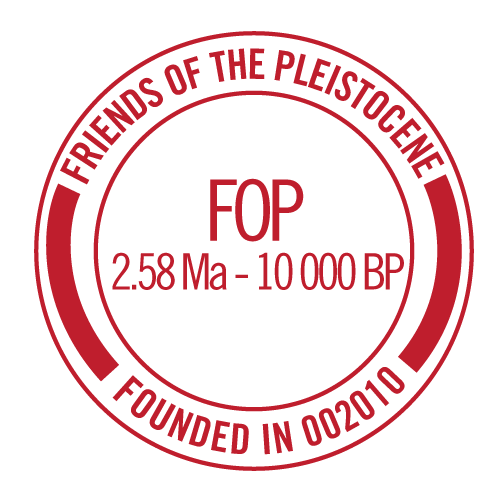 The Friends of the Pleistocene try to encourage this realization by spurring our temporal capacity for imagination. An interactive and creative research collaboration by Elizabeth Ellsworth and Jamie Kruse, the duo behind Smudge Studios, FOP’s mission is, essentially, to create the kinds of pictures Smith imagined. Through a variety of projects, they direct our focus to the Pleistocene traces that continue to reverberate through our contemporary world, and to the impact our culture makes on the ancient landscapes around us.

The geologic epoch of the Pleistocene is commonly dated from 2.58 million to 10,000 years BP (before the present). We know it as the time of glacial periods, mammoths, saber-toothed cats, and Neanderthals. It is also the period of humanity’s childhood: it’s during the Pleistocene that the genus Homo first learned to walk upright and manipulate its environment with stone tools. This epoch predates agriculture, or any notion of ‘civilization’ – yet its landscapes are still as much a part of our present world as they were to our early ancestors. As Kruse and Ellsworth explain,

The Pleistocene landscape literally shapes how we live today and affords the placement and design of many infrastructures in our contemporary lives, such as building highways along the spines of glacial moraines, as in the case of the Long Island Expressway, or the great views afforded by the now extinct Pleistocene Lake Bonneville’s shoreline “benches” where suburban houses perch in Draper, Utah. We also use Pleistocene lakebeds as testing grounds for weapons (such as for the Trinity test in 1945) or for recreation, like the Bonneville Salt Flats or Cape Cod’s beloved swimming holes – the kettle ponds.

And just as the Pleistocene continues to shape our world, so do we continue to make an impact on it. Kruse and Ellsworth recall making this realization during a residency at the Center for Land Use Interpretation (CLUI) in Utah:

… we came across their (CLUI’s) book on the Nevada Test Site. At that point, we had no idea that over 1000 nuclear bombs had been detonated in the United States. We began to realize that the tourist experience of the American West often overlooked the fact that just behind or underneath the stunning backdrops of iconic scenery were invisible vibrant human-made materials, and they were actively reshaping the landscapes we were moving through, at the very moment we were moving through them. The forceful actions of many of those materials were potent enough to continue this reshaping into deep geological futures. This led to future trips where we actually toured the NTS and ended up designing a project to visit the sites where underground testing had occurred outside the NTS. It was literally standing at these sites, in the present, that geologic time and the contemporary moment came vividly together for us. 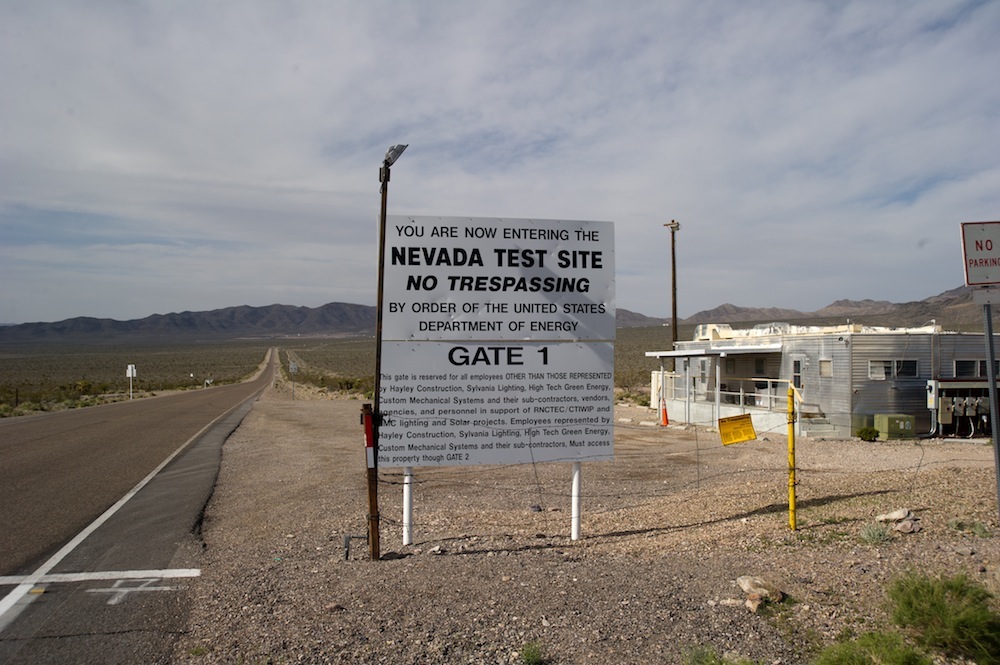 Exploring such ancient sites across the United States and beyond, the Smudge duo harness art and design as useful tools to spur our imagination into time scales that dwarf a human lifetime. They produce photographic essays, narrative field guides, educational events, and speculative tools to help others explore the convergence of human and geologic processes – and they add not one, but two zeroes to their date notations!

Smudge’s projects include an examination of how the Pleistocene geology of the Great Lakes continues to influence processes of urbanization in the region; visualizing the ancient geological materials that constitute the man-made buildings of New York City; mapping the intersection of human and geologic processes in the American West; and representing the material origins of the energy that sustains our civilization.

Much of their work has examined the handling of nuclear waste – an issue that indelibly reminds us of how tied we are to the deep material processes of our world:

In realizing that the contamination can’t be moved from where it is, and will stay contaminated for tens of thousands of years in the future, it seems important to start developing capacities to think and design for larger timescales. … We humans have catalyzed a geologic impact around the globe, materially. These effects are much more than the nuclear, but nuclear materials are such a clear and potent example, they still exist at the root of our work and are why we veered in this direction so many years ago.

Their projects tend to incorporate an interactive approach: Ellsworth and Kruse try not only to visualize, but to encourage others to join in their imaginative processes:

Interactivity seems key to the ideas we’re working with – which focus on the importance of being able to experience the material reality and force of processes and movements that are either hard for humans to sense physically, or hard for humans to admit politically or emotionally. 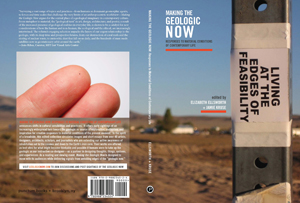 In 02012, Kruse and Ellsworth published Making the Geologic Now, an edited collection of photographs and essays by more than forty contributors that include Rachel Sussman, (photographer/author of the Oldest Living Things in the World and Long Now SALT speaker) and Elizabeth Kolbert (The Sixth Extinction and Field Notes from a Catastrophe).

Making the Geologic Now documents and encourages what they have identified as a “turn toward the geologic,” a collection of “early sightings” of emergent social and cultural awareness of the deep geological parameters of our world. The book is meant to be generative rather than analytical or critical; in their introduction Kruse and Ellsworth describe the contributions as

places to think experimentally about what might become thinkable and possible if humans were to collectively take up the geologic as an instructive partner in designing thoughts, objects, systems, and experiences. The book provides an armature for framing responses to that idea.

Earlier this year Kruse and Ellsworth went to Norway for a work they called “Inhabiting Change” – it’s part of a larger collaboration that investigates the socio-geographic changes ahead for the Arctic Circle. Once seen as a remote forbidding place, it is now being transformed by the forces of capitalism, the pinch of dwindling resources, and a growing global population. As they expressed their goal for this project:

We intend to create dynamic tracings of the arrival of new futures of the North into widespread human + nonhuman cognizance. Works that result from Inhabiting Change may take the form of a series of linked multi-media dispatches. We also intend to compose a collaborative, human + nonhuman voice with multiple, moving points of view—while we live and make in the midst of the forces of change that currently are composing emerging futures north.

Ultimately, what Ellsworth and Kruse hope people take away from their work is new curiosities about and appreciations of their bare physical materiality – the chemical and physical fact that we are “walking rocks,” and that we live within the geologic, as a condition of our daily lives.

Making The Geologic Now can be purchased or downloaded from Smudge Studios. They also offer a place to contribute your own sightings of the geologic.