The European Space Agency’s Rosetta probe has sent some great images back to Earth illustrating its approach as it has pulls to within 2 million kilometers of 67P/Churyumov-Gerasimenko the comet it is targeting. Later this year it will drop a lander on the comet to conduct important experiments on its composition–more on that below.

During development of the mission the ESA invited Long Now to include one of our Rosetta Disks on the probe. And so this ESA mission is not only the most detailed comet researcher ever, it is also the first off-world archive of thousands of human languages.

The Rosetta Project is Long Now’s initiative for long-term archiving of human languages. The disk includes parallel texts (inspired by the original Rosetta Stone) and thousands of pages of information documenting languages from all over the world. The Rosetta disk that is on the probe is an early prototype, a more recent design is shown below: 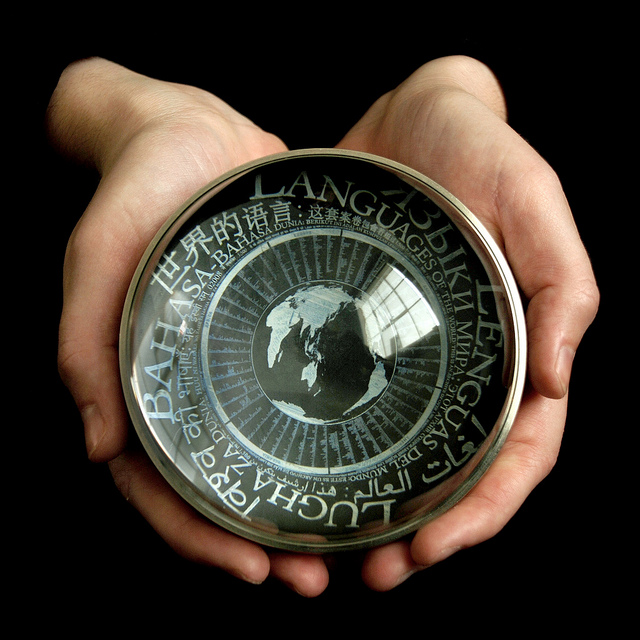 The Rosetta space probe had been in hibernation since 02011, having completed several flybys and slingshot maneuvers after being launched in 02004. San Francisco’s Exploratorium marked the ESA’s successful re-awakening of the probe in January and continues to follow its journey. Last month Exploratorium Senior Scientist Paul Doherty spoke with Rosetta Project Scientist Claudia Alexander about recent developments and what scientists hope to learn from this up-close look at a comet.

Comets generally have very eccentric orbits, meaning they travel in very squished ellipses, rather than perfectly round circles. That eccentricity causes the comets to oscillate between the outer reaches of the solar system and relatively close passes by the Sun. Comet 67P is on its way in toward the Sun right now and that means it’s heating up. This causes ice to melt and boil and eject gas and dust from the comet’s nucleus, creating the characteristic comet tail. The Rosetta mission will orbit 67P for 17 months, through its closest approach to the Sun and then out again. This will provide an unprecedented level of detailed data as the comet goes through the significant changes caused by drastic changes in temperature.

After 17 months of orbit and study from above, the plan is for Rosetta’s Philae lander to drop onto the comet itself in November. It will drill into the surface of the comet and perform experiments to learn more than ever before what composes a comet. And you can follow its progress on Twitter.