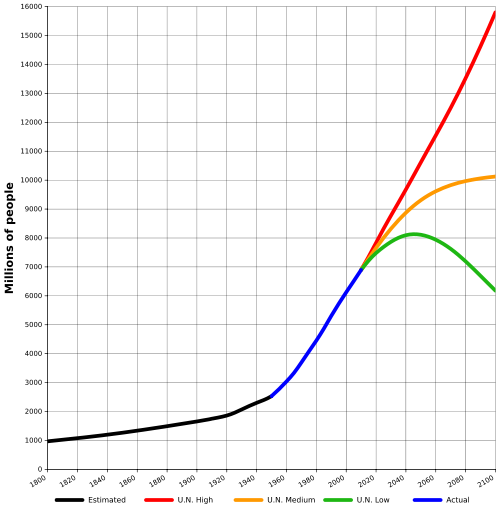 In a New York Times op-ed piece recently, geographer Erle C. Ellis argues “Overpopulation is Not the Problem,” dismissing fears that humanity might exceed the Earth’s carrying capacity and bring global calamity upon ourselves.

Malthusian fears swing in and out of fashion, and the pendulum can often go too far the other way, into techno-utopianism. Ellis does argue that technology allows us to increase local carrying capacity, and in fact he sees this as a deep-seated characteristic of human nature. But in his argument, technology is no panacea.

The world population is now estimated at 7.2 billion. But with current industrial technologies, the Food and Agriculture Organization of the United Nations has estimated that the more than nine billion people expected by 2050 as the population nears its peak could be supported as long as necessary investments in infrastructure and conducive trade, anti-poverty and food security policies are in place.

Keeping everyone fed, he points out, is already within our technological powers; it simply eludes our politics.

It was almost ten years ago that Phillip Longman pointed out in a SALT talk that what we actually ought to worry about is depopulation. Citing urbanization, contraception, education (especially of women), declining infant mortality, and several other factors, he explained that fertility is falling quickly and that much of the world is already reproducing below the replacement rate.  This averts the Malthusian crisis many feared, but may offer other challenges to the economy.

Ultimately, it’s not fewer people that we need, but rather a better understanding of our relationships with nature and amongst ourselves in order to effect better governance and a healthier balance within the biosphere. As Ellis puts it,

The science of human sustenance is inherently a social science. Neither physics nor chemistry nor even biology is adequate to understand how it has been possible for one species to reshape both its own future and the destiny of an entire planet. This is the science of the Anthropocene.