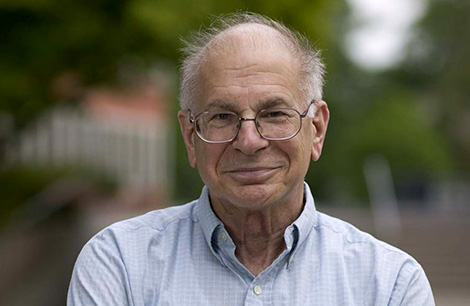 Daniel Kahneman is one of the world’s foremost psychologist. Back in the early 1970s, Kahneman and his research partner, Amos Tversky, “set out to dismantle an entity long dear to economic theorists: that arch-rational decision maker known as Homo economicus”. Their research led to a new compendium of human error and bias, and formed a new field called “prospect theory“, for which the duo won the Nobel Prize in economics in 2002.

In his 2011 book, Thinking, Fast and Slow, Kahneman summarizes decades of his research in behavioral economics and breaks thought into two general categories, System 1 and System 2. System 1 is what we usually associate with intuition, immediate reaction, and fast thinking. The system has relative advantages and disadvantages–one can save time and energy by using this system, yet this system often falls victim to stereotyping, visceral reactions, and general biases. System 2 occupies the other end of the spectrum. When we are thinking using this system, we are retrieving information, questioning our first answer, and slowly honing in on a balanced and informed opinion.

Rather than take the easy route of disparaging “fast thinking” in favor of “slow thinking”, Kahneman is careful to show how each has their relative strengths. Even though System 2 is often superior to System 1 in thinking about complex issues, Kahneman points out that self-control is linked to the same cognitive resources used during slow thinking. To use but one example: during a study where some participants were asked to memorize seven numbers and then asked if they would like a “virtuous” fruit salad or “sinful” chocolate cake, the participants that were negotiating the cognitive load of memorizing the seven numbers were less likely to exhibit self-control and chose the cake. We each have a reservoir of self-control/decision power, and we use System 1 to offset decisions that needlessly drain this reservoir. 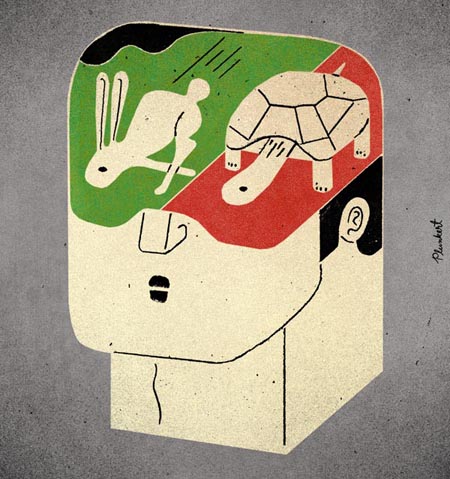 Daniel Kahneman goes beyond pop-psychology to explain how we actually think, the promise and peril of different types of thinking, and how to train your mind to recognize what type of thinking is needed. Part of Long Now’s mission is to make long-term thinking as automatic and common as short-term thinking is now. Part of that battle will be on a societal level, but another part of the battle will be within our own heads, and Kahneman provides a map to thinking in the long-term. To learn more about the cognitive biases that drive different types of thinking, come see Daniel Kahneman at Marines Memorial Theatre on Tuesday, August 13th.