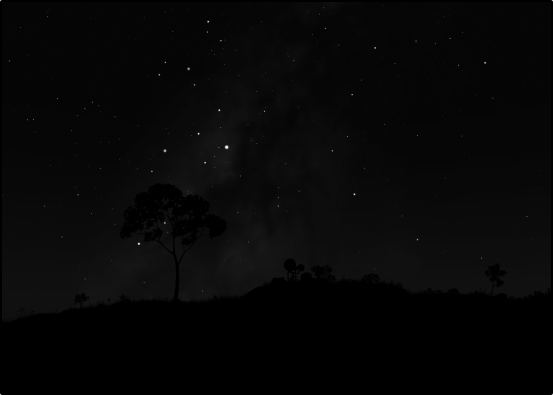 The stories told in comics can range from decades-long epics to a single wordless image. Though Randall Munroe’s web comic xkcd has tended toward the shorter end of this vast spectrum, he recently concluded a narrative arc that unfolded over several months in the form of Time.

Starting off as a couple stick figures sitting on the beach and the instruction to “Wait for it…”, the image automatically updated in a kind of super-slow animation that followed the characters on a journey of discovery. Readers (viewers?) had little explanation to go on and began looking for clues and forming theories about the story’s setting and direction. A frame showing the night’s sky allowed astronomy buffs a chance to show that the story seemed to be taking place thousands of years into the future (just as we hope the 10,000-Year Clock’s face will prove useful). Munroe confirmed exactly that in a post on his blog once the story had concluded:

And as Time unfolded, readers gradually figured out that it was a story, set far in the future, about one of the strangest phenomena in our world: The Mediterranean Sea sometimes evaporates, leaving dry land miles below the old sea level … and then fills back up in a single massive flood.

Wired explores even further the research Munroe put into his story, including geographically appropriate flora and fauna, as well as creating  a constructed language:

With the help of a linguist, Munroe invented a language and orthography (dubbed “Beanish” by readers) for one of the foreign cultures his characters encounter, which he wanted to be “as different from [English] as our language is from Linear A or Linear B,” the still-undeciphered writing systems of ancient Crete. His abstruse approach worked; despite the efforts of “Time” superfans, no one has been able to decode the language, which Munroe finds fitting since “we haven’t cracked Linear A, either!”

Time chronicles a cataclysmically accelerated event in an uncharacteristically patient, ponderous style. Here’s the whole thing, turned into a video: