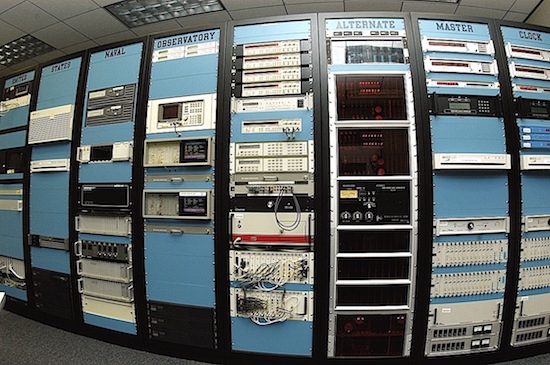 The U.S. Naval Observatory Alternate Master Clock, located on the 2nd Space Operations Squadron’s operations center, is accurate to within one second every 20 million years. The clock showed 23:59:60 Saturday as 2nd SOPS and USNO professionals added the first leap second in seven years.

About two months ago, a group of scholars gathered in Charlottesville, Virginia, to discuss the future of civil time – the universal clock that keeps the entire globe and its nearly 7 billion human inhabitants in sync. Their conversation had begun with a meeting in 02011 (at which Long Now co-founder and Board member Danny Hillis submitted a paper on timekeeping in the 10,000-Year Clock); this year, the debate focused on the merit of the leap second: the corrective increment of time that is added to (or subtracted from) the end of a winter’s or summer’s day roughly once every eighteen months in order to synchronize the world’s clocks with the small but erratic changes in the speed of Earth’s rotation.

At stake in this debate is a question about how we wish to define civil time – or Coordinate Universal Time (UTC), as it is officially known. Now based on atomic timekeeping systems, eliminating the leap second would effectively mean decoupling UTC entirely from the movement of Earth, Moon, and Sun. In a recent article published in Aeon magazine, conference attendee and science writer Dava Sobel took the opportunity to explore some of the deeper questions this possibility raises about the very nature of timekeeping, and of time itself.

Until quite recently in human history, time was governed by the astronomical cycles of Earth’s orbit and rotation. We scheduled our daily activities around the moving shadows on a sundial, and planned our year in accordance with the seasonal lengthening and shortening of days. Time was indelibly bound to our precise physical location, yet simultaneously defined by rhythms much larger than ourselves.

But with the emergence of global commerce and communication came the need for standardization: we had to take control of time, and submit its rhythms to our need for disciplined coordination. First came the adoption of Greenwich Mean Time as the basis for timekeeping across the globe; then came the realization that the behavior of tiny particles – atoms – could offer a much more precise measurement for time than the movement of large celestial bodies. Sobel writes:

A second of time has its roots in the sexagesimal numerology of the ancient Sumerians, but it was too fleeting an interval to be registered on a mechanical clock until the 16th century. By 1960, a single second could be subdivided into slivereens by an atomic clock. The regularity of atomic-frequency timepieces promised a far more reliable standard than the spinning or revolving of the wobbly old Earth, and forced authorities to rethink their concept of a second’s duration. In 1967, the official definition of a second changed accordingly. What had once been a tiny fraction (1/86,400) of a 24-hour day became the time taken by an atom of caesium-133 to flip through certain characteristic quantum-mechanical changes 9,192,631,770 times.

When the caesium clock replaced the Greenwich Meridian as the world’s authoritative measure of time, it was decided that this new UTC should nevertheless maintain agreement with GMT and the rotation of Earth; these two had, after all, served so long as a global reference point. But as Sobel suggests,

… the Earth hiccups and falters. Its rotation, as monitored by the International Earth Rotation and Reference Systems Service (IERS), speeds up and slows down in response to the motions of the tectonic plates that pave its surface, the flow of molten iron in its core, the recession of glaciers, the circulation of the atmosphere, and, most important, the pull of the Moon.

Earth’s imprecise wobbling causes a seeming drift in our precise atomic clocks, upsetting the coordination of new time with the old. In 01972, therefore, the IERS introduced the leap second: whenever the agency records a discrepancy of more than 9/10ths of a second between GMT and UTC, it legislates the insertion (or deletion) of a second at the end of a predetermined day in summer or winter. In the forty-one years since, 25 such added leap seconds have silently stretched the length of our atomic days.

Over the course of these four decades, UTC has replaced GMT as the world’s main reference for time. Time is no longer local, yet grand: it is now abstractly universal, yet wholly disciplined to the needs of a global civilization. And now, even leap seconds – this last connection between our clocks and the erratic cycles of the natural world around us – are up for debate.

Doing away with the leap second means decoupling civil time from the Earth’s rotation – something that has never been attempted by any known civilisation. The demise of UTC as we know it would alter the meaning of ‘day’ that underpins legal, cultural and religious practices the world over. UTC would no longer be ‘coordinated’ in the same fashion. Although it would take a few thousand years for Saturday to fall on Sunday, that event would loom on the horizon. 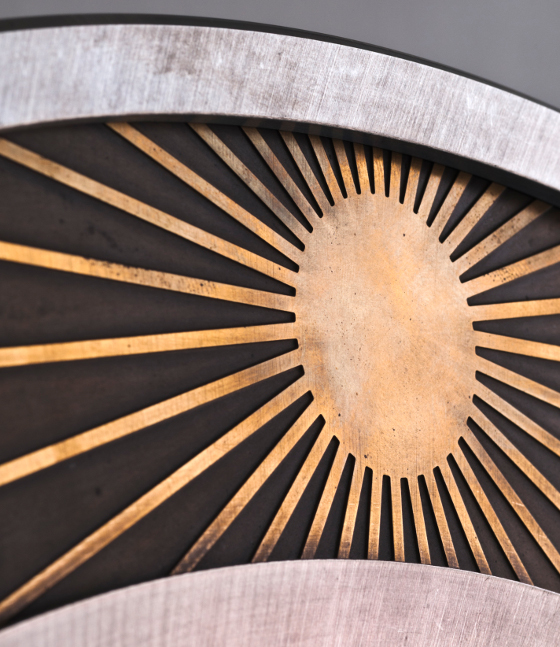 We seem to have arrived at a stand-off between man-made and “natural” cycles of time – between the precision of the atomic clocks we’ve designed, and the unpredictability of our planet’s motion. Sobel suggests it’s easy to mistake that precision for truth:

Given that all atoms of caesium-133 behave the same way, it’s tempting to regard the unwieldy number 9,192,631,770 as some sort of fundamental rhythm – a microcosmic time cue, or zeitgeber.

But seeing through this elision, as Sobel urges us to do, invites us to recognize that no timekeeping system is any more or less “natural” than any other. In fact, isn’t the notion of “time” itself (and in particular, the idea that it is linear) ultimately always a man-made abstraction? Something we’ve invented, much like money, to quantify and keep track of the natural cyclical processes that govern the world we live in?

In a thousand – or perhaps even just a hundred – years, we might discover a clock that is yet more precise than a caesium atom, and transform our notion of time yet again. For these, as for our present-day clocks, the irregular movement of Earth, Moon, and Sun will offer a perpetual challenge. Nevertheless, these natural cycles are likely to outlast any human definition of time. No matter how successful we are (or become) in disciplining and standardizing time, the imperfect cycles of day and night, summer and winter, low tide and high tide will most likely always serve as an important reference point for our understanding of the world we live in. In the year 12,034, Earth might spin around its axis in as little as 22 hours – or perhaps as much as 25. But here at Long Now, we predict that it’s this cycle, rather than the fluctuations of a caesium atom, that will continue to define our notion and experience of a ‘day’.