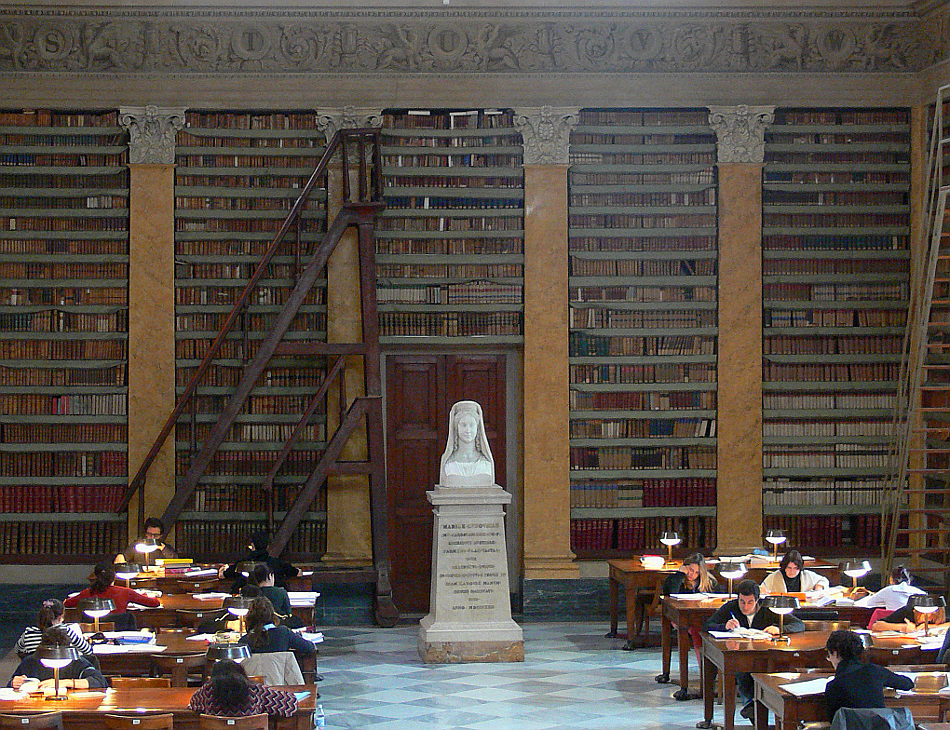 We’ve got another long-term dispatch from our man-on-the-ground in Italy, Davide Bocelli:

We all know that libraries tend to burn. It has been true for the Library of Alexandria and even for the fictional library of the abbey that Umberto Eco created in his “The Name of the Rose”. In October 02012 a short circuit occurred in one of the oldest galleries of the Biblioteca Palatina di Parma, one of the richest collections of rare and ancient books in the world. The fire stopped just before turning into a cultural disaster. Now the library is closed and inaccessible to the public, so the librarians decided to create a temporary office to keep distributing books, documents and information to a local and international community of students and researchers. Suddenly the mission of this multi-centennial institution has turned from the preservation of books to the preservation of its existence and identity. The economic crisis in Italy has brought deep cuts to the cultural budget of the nation; the expenses to return the library to a safe condition are far beyond the available public funds. The solution is to let the world understand the value, the importance, and the usefulness of such a rich institution in the contemporary world. To some extent, it’s like saying that in the last couple of centuries we learned to take care of the books, now we have to move to the next step – let the people enjoy them.

The Palatina Library has an almost uninterrupted lineage of librarians that dates back to the foundation of the institution in 01761, following the visionary cultural project by Guillame du Tillot, prime minister of the Duke of Parma, Philippe of Bourbon. In 02013 the director is Sabina Magrini, Phd.

The first librarian was Paolo Maria Paciaudi, who used a card catalogue for the first time in Italy. It took 8 years to collect the first set of books and to prepare the galleries in the Pilotta palace in Parma. The rooms and the original shelves were designed by the French architect Ennemond Alexandre Petitot. The Palatina opened to the public in 01769.

The library was named ‘Palatina’ in order to recall the ancient library created inside the Temple of Apollo Palatinus in ancient Rome.

This is the place where you can read an original letter by Galileo Galilei, Niccolò Machiavelli, Martin Luther or Giuseppe Verdi. Here you can read a Divina Commedia by Dante Alighieri in a XIV century illustrated manuscript with miniatures or a Hypnerotomachia Poliphyli in the Manutio’s Edition of 01499.

The book collections started in 01761 continued for centuries. Most of their volumes were bought all over Europe upon the generous funding by Duchess Marie Luise of Austria (01791-01847), wife of Napoleon. It has been a cultural investment for future generations as the collections constitute a unique example in the world’s heritage.

The most remarkable collections of the Palatina Library are:

The library contains the Bodoni Museum which is an international bibliographic and research center. Many of the original sets of the Bodoni types are shown in this museum.

It is interesting to see that this difficult moment and the temporary closure will lead the institution to exceed its original scope. While the digitization of the books, prints and manuscripts will decrease the stress on the original artifacts, the institution will concentrate on the local and global communities’ awareness of conservation challenges and the usefulness of humanities research. To reopen the library completely to students and researchers, a major part of the funding will come for the first time in its history, not from the Government but from private donations. Funny enough, in the long run the Library has to explain itself to guarantee its future.

Thanks to:
Sabina Magrini, director of the Palatina Library
Laura Casalis, FAI Parma, The Reopen Palatina Committee
Corrado Mingardi, Library of the Cariparma Foundation in Busseto