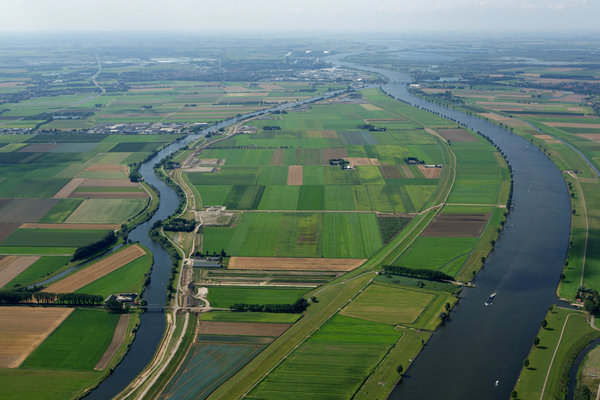 When a devastating flood destroyed much of the southwestern Netherlands in 01953, its government decided it was time for action. Over the next few decades, the nation poured research and financial resources into the construction of the Deltawerken, a massive network of dams and storm barriers that now protects the country’s lowest lying provinces from the kinds of floods that are encountered once in a millennium – and even against those that might occur once every 10,000 years.

As Long Now’s Alexander Rose explained in a 02011 blog post, the Maeslant barrier – one of the largest man-made moving structures in the world – has already begun to repay the cost of its construction by offering the Rotterdam port protection from surging seas on multiple occasions. It has been an example of effective water management for other low-lying regions of the world.

But these days, it seems the Netherlands are changing their approach to the battle with rising sea levels. Faced with continuing climate change, the Dutch are responding not by raising the height of their barriers, but by breaking through their dykes. As New York Times reporter Michael Kimmelman recently explained,

“… the evidence is leading them to undertake what may seem, at first blush, a counterintuitive approach, a kind of about-face: the Dutch are starting to let the water in. They are contriving to live with nature, rather than fight (what will inevitably be, they have come to realize) a losing battle. Why? The reality of rising seas and rivers leaves no choice. Sea barriers sufficed half a century ago, but they’re disruptive to the ecology and are built only so high, while the waters keep rising. American officials who now tout sea gates as the one-stop-shopping solution to protect Lower Manhattan should take notice. In lieu of flood control the new philosophy in the Netherlands is controlled flooding.”

In other words, the Dutch approach is no longer one of fighting the inevitable consequences of climate change, but rather of strategically harnessing natural resources to mitigate its impact on human life. The government’s new focus is a project called Room for the River, a $3 billion investment in land redevelopment. What was once agricultural land is now being transformed into multipurpose flood plains and spillways. Farms have been displaced, and polders are converted into recreational nature zones that can hold overflow from surging rivers if need be.

“By lowering the dike along the northern edge of the two-square-mile Overdiepse Polder, the Bergse Maas canal will be able to spill in [to the polder], diminishing the water level in the canal by a foot, enough to spare the 140,000 residents of Den Bosch, upriver, in the event of once-every-25-year floods. By displacing farmers, in other words, residents in that city can breathe a little easier.”

The cost-benefit analysis adds up, but needless to say, the project has left some farmers quite unhappy. In negotiation with the government, they were able to settle on a compromise: a series of mounds would be built at the edges of the floodplains, on which at least some of the displaced farms could be rebuilt.

Kimmelman sees a lesson here: an efficient response to climate change requires compromise and tough decisions. In other words: it calls for a collective engagement in long-term thinking, and a willingness to make the necessary sacrifices.

“[G]ood government makes those decisions while giving affected residents adequate knowledge and agency: the ability to make choices, and the responsibility to live by them. Politically that may be trickier than commissioning sea barriers or making dikes into boardwalks or redesigning waterfronts and neighborhoods to accommodate floods and storms. But it’s necessary. And it may be the most important lesson that the Netherlands has to offer at the moment.”