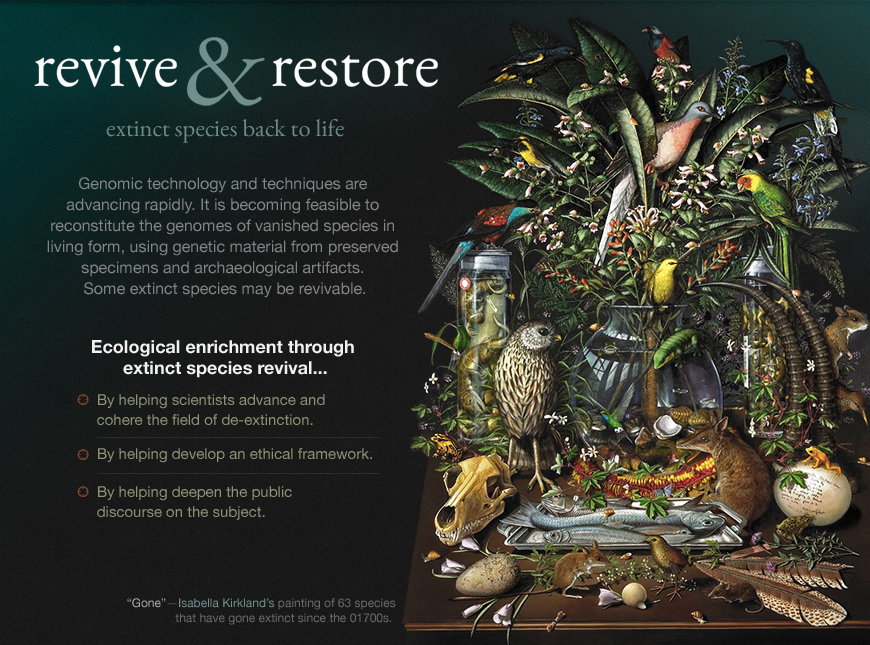 Where molecular and conservation biology meet, a new scientific field is emerging: De-extinction. Scientific and technological advances are making the prospect of reviving extinct species a realistic goal.

Revive & Restore is a project of The Long Now Foundation that seeks ecological enrichment through extinct species revival.

A private meeting last fall, jointly organized with the National Geographic Society, brought various practitioners in this burgeoning field together to discuss challenges, long-term goals, best practices, and ethics. As an outcome of that private meeting, the NGS offered to host a public forum to further explore the science of de-extinction and promote dialog on the ethical issues surrounding it.

Along with a brand new website designed and built by Benjamin Keating and Matthew Brown, Revive & Restore is unveiling plans for its first public forum to be held in partnership with the National Geographic Society on Friday March 15th: 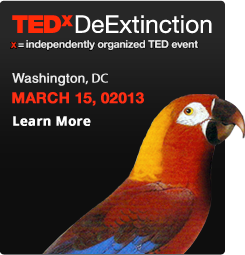 Featuring Carl Zimmer, George Church, Revive & Restore’s own Ben Novak and 22 other speakers, it will be a daylong extravaganza of de-extinction science, art and ethics.

On the TEDxDeExtinction website, you can learn more about the event, buy tickets to attend in person, or sign up to host a livestream viewing party. Keep up with announcements related to the event on Twitter and Facebook.

Prior to TEDxDeExtinction, on Wednesday 2/27/13, Revive & Restore (and Long Now) co-founder Stewart Brand will appear at TED to give a talk on the increasing feasibility of bringing back extinct species.

(This independent TEDx event is operated under license from TED.)