PanLex, the newest project under the umbrella of The Long Now Foundation, has an ambitious plan: to create a database of all the words of all of the world’s languages. The plan is not merely to collect and store them, but to link them together so that any word in any language can be translated into a word with the same sense in any other language. Think of it as a multilingual translating dictionary on steroids.

You may wonder how this is different from some of the other popular translation tools out there. The more ambitious tools, such as Babelfish and Google Translate, try to translate sentences, while the more modest tools, such as Global Glossary, Glosbe, and Logos, limit their scope to individual words. PanLex belongs to the second, words-only, group, but is far more inclusive. While Google Translate covers 64 languages and Logos almost 200 languages, PanLex is edging close to 7,000 languages. With the knowledge stored in PanLex, translations can be produced extending beyond those found in any dictionary.

Here’s an example to give the basic idea of how it works. Say you want to translate the Swahili word ‘nyumba’ (house) into Kyrgyz (a Central Asian language with about 3 million speakers). You’re unlikely to find a Swahili–Kyrgyz dictionary; if you look up ‘nyumba’ in PanLex you’ll find that even among its half a billion direct (attested) translations there isn’t any from this Swahili word into Kyrgyz. So you ask PanLex for indirect translations. PanLex reveals translations of ‘nyumba’ that, in turn, have four different Kyrgyz translations. Three of these (‘башкы уяча’, ‘үй барак’, and ‘байт’) each have only one or two links to ‘nyumba’. But a fourth Kyrgyz word, ‘үй’, is linked to ‘nyumba’ by 45 different intermediary translations. You look them over and conclude that ‘үй’ is the most credible answer.

How confident can you be of your inferred translation—that Swahili ‘nyumba’ can be translated into Kyrgyz ‘үй’? After all, anyone who has played the game of “translation telephone” (where you start with Language A, translate into Language B, go from there to Language C and then translate back to Language A) will know this kind of circular translation can result in hilarious mismatches. But PanLex is designed to overcome “semantic drift” by allowing multiple intermediary languages. Paths from ‘nyumba’ to ‘үй’, for example, run through diverse languages from Azerbaijani to Vietnamese. Based on such multiple translation paths, translation engines can provide ranked “best fit” translations. As the database grows, especially in its coverage of “long tail” languages, possible translation paths will multiply, boosting reliability. 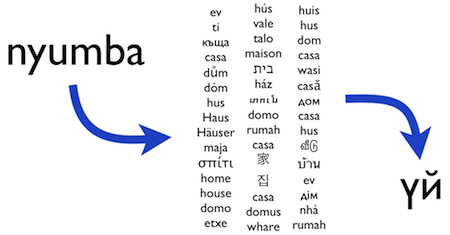 There are a couple of demonstrations that you can try with a browser. This will give you a sense of the magnitude of the data and the potential power of the database as a tool. One of these is TeraDict. If you enter a common English word like ‘house’ or ‘love’ you are likely to get translations into hundreds, or even thousands, of languages, and in some cases many translations per language. French, for example, has 25 translations for ‘house’ and 55 translations of ‘love’, including ‘zéro’ (hint: Think tennis!). Two similar interfaces allow you to explore the database in either Esperanto—InterVorto—or Turkish—TümSöz.

The second web tool, PanLem, is considerably more complicated and is used mostly by PanLex developers to enlarge and evaluate the database. But it’s publicly accessible. There is a step-by-step “cheat sheet” to help you climb the learning curve.

PanLex is an ongoing research project, with most of its growth yet to come, but the database already documents 17 million expressions and 500 million direct translations, from which billions of additional translations can be inferred.

PanLex is being built using data from about 3,600 bilingual and multilingual dictionaries, most in electronic form. The process of ingesting data into the database involves substantial curation and standardization by PanLex editors to ensure data quality. The next stage of collection will likely involve dictionaries that exist only in print form. It is hard to say how many are out there, but we expect it is on the order of tens of thousands. It is likely that most of these have not been scanned or digitized. Once they are, there will be a significant effort to improve the optical character recognition (OCR) for these materials—an effort which is likely to be highly informative to the development of OCR technology, since it will involve the human identification of many forms of many different scripts for languages around the world.