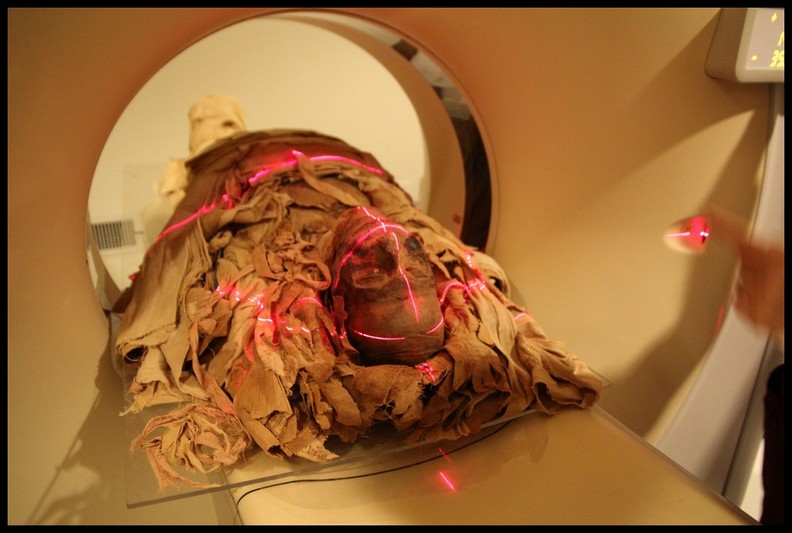 Presumably the programmers at Phillips weren’t imagining this sort of patient.

Long Now Board Member David Eagleman recently had a very unusual visitor at his lab. At three thousand years of age, this is by far the oldest person Eagleman has ever put through a scanner. Neshkons is an Egyptian mummy, exhumed from Luxor in the 19th century and recently acquired by an acquaintance of Eagleman’s. It turns out that scanning a mummy presents some interesting problems (and neuroscientific disappointments, such as having had his brain removed through his nostrils with a hook at death). Eagleman described the challenges in a blog post:

First, for those of you who know my lab, you’ll know that we employ magnetic resonance imaging (MRI) when trying to decipher the human brain. So this was my first plan for the mummy.  But there was a big concern here: the possibility that Neskhons had, enfolded in his ancient, never-unwrapped linens, a hunk of metal.  That would spell bad news for the MRI, which is a giant magnet. […]

And there was a second problem. MRI scanners work, in part, by detecting changes in electron spin in fluids in tissue and bone. Neskhons had no fluid at all.

In the end, Eagleman’s team performed a CT scan, “a series of X-rays taken from all different angles and then reconstructed into a 3-dimensional whole.” The results were fantastic, with high-resolution 3-dimensional images of a body still hidden inside its linen cocoon after three millennia. (Except for its head, which was laid bare at an “unwrapping party” in Cleveland in 1900.) The mummy is currently on display at the Museum of Fine Arts in Houston, Texas.

Neskhons’ sarcophagus […] is vividly painted with scenes about the afterlife. He presumably wouldn’t have guessed that his body’s afterlife would take place in a transparent case in a foreign land known as Houston, Texas, among tall and long-living people with magical tubes that have the power to peer into hidden dimensions of a body and reconstruct it at 1.5 millimeter resolution.  For this reason and others, we treated the occasion with the respect and solemnity. After all, who knows where our bodies will end up in 3,000 years hence? Who will be looking at our empty hulls, and what technologies will they employ to reconstruct the details of our lives?