Reposted from The Rosetta Project blog, written by Colin Farlow:

In a new study published in the journal Language and Cognition “When Time is Not Space,” a team of researchers from University of Portsmouth and Federal University of Rondonia claim that the Amondawa, a small Amazonian tribe, speak a language with a very uncommon conceptualization of time. The story was recently picked up by BBC, revealing that the debate about whether language influences thought is very much alive and newsworthy. 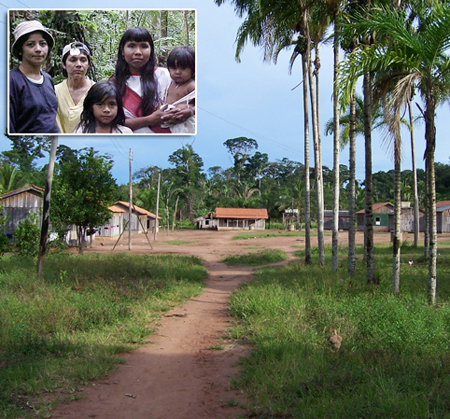 According to researchers Sinha et al., the Amondawa have no words for talking abstractly about time (as in the English word ‘time’), or time periods (like ‘year’):

The mapping of time to physical space is commonly found in human language, and its absence in Amondawa is perhaps the most surprising result of the study. Rather than having a time-space metaphor, the Amondawa conceptualization of time is based on “social activity, kinship and ecological regularity.”

Pierre Pica, a theoretical linguist at France’s National Centre for Scientific Research, question the conclusions derived from this new research. Pica explains that just because Amondawa does not use cardinal chronology, does not mean they view themselves advancing through time any differently than the rest of us who use a cardinal chronological system.

Sinha et al. state that the tribe’s language in no way affects their cognitive ability to grasp temporal concepts — they talk about events, and sequences of events, and learn Portuguese which does have abstract time expressions. Rather, the Amondawa language provides a different way of construing and talking about temporal concepts in daily life.

This contention about whether the Amondawa language affects its speakers’ thought processes hearkens back to a famous study by Benjamin Lee Whorf on the Hopi Language in the first half of the 20th century. This study was a foundational example for Whorf’s “linguistic relativity hypothesis” – the idea that the language you speak influences the way you think. From his study of Hopi, Whorf concluded:

“The Hopi language is seen to contain no words, grammatical forms, constructions or expressions that refer directly to what we call TIME, or to past, present or future, or to enduring or lasting…the Hopi language contains no reference to TIME, either explicit or implicit.” [1]

Whorf’s ideas about Hopi have received a great deal of criticism over the years, and his data was critiqued as erroneous evidence resulting from deficient research practices. [2] Nevertheless, the idea that language influences thought has certainly stuck around, and is now being raised by a new generation of researchers like Sinha et al who are gathering new data from small and threatened languages around the world.

For more on the relationship of language and thought, listen to our podcasts of previous Long Now seminars by Lera Boroditsky as well as Daniel Everett who talks about Pirahã, a language also from the Amazon.

[1] Whorf, Benjamin Lee. 1950. An American Indian Model of the Universe. The
International Journal of American Linguistics 16(2).

[2] In an interview by BBC, Guy Deutscher explains his ideas about language and thought in addition to describing Benjamin Whorf’s research on Hopi Language.

The author of this post, Colin Farlow, is a 02011 summer intern with the Rosetta Project. He recently graduated from Indiana University, where he studied East Asian Languages and Cultures and Philosophy.