Last Friday evening, Long Now joined the Global Lives Project in celebrating their world premiere opening at San Francisco’s Yerba Buena Center for the Arts.  Through a huge volunteer effort, Global Lives has produced ten films – each 24 hours long – that visually capture the everyday life of ten people around the planet.  And on Friday we could view them all, at the same time, in the same room.  Ten huge screens hung from the ceiling of the Yerba Buena Forum and around a thousand people throughout the evening ambled around and under them, listening as voices emerged — Kai Lu, from Anren China speaking to his wife in a village dialect of Sichuan Yi, young Edith Kaphuka from Ngwale Village, Malawi code-switching with her friends on the playground between Chichewa and Chiyao, James Bullock of San Francisco chatting up the tourists on his cable car in West Coast American English.  Some screens showed people working, others playing, some eating, others sleeping — a glimpse into one human day on planet earth. 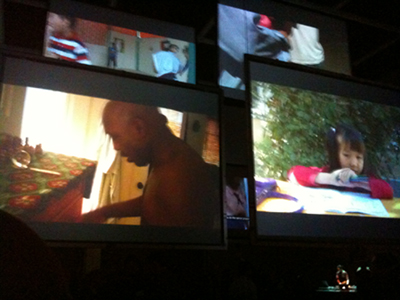 A second ongoing installation in the YBCA Room for Big Ideas provides a more intimate viewing space, with ten partitioned rooms and LCD viewing screens.  Each room is furnished with seating for one or two, and with walls and floors embellished with fabrics, colors and textures evocative of the region of the film.  Kiosks and wall graphics give a bit of background about the project, and the ten participants.  And while the installation as a whole gives the sense of a finished, polished project, three computers set up prominently in the room tell a different – and quite wonderful – story. 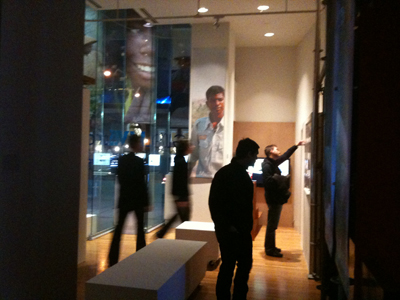 This is not a finished project – in fact, it is very much a work in progress.  One of the greatest ongoing efforts is one that anyone can help with – the subtitling of each film in as many languages as possible (through the crowdsource subtitling site dotSUB).  The first pass was getting all ten films subtitled in English for the opening night, and that effort is still only about 80% done.  It is an enormous effort.  Jason Price, one of the producers of the Malawi shoot, tells the story of being nearly at wits end trying to find anyone to help translate Edith Kaphuka’s Chichewa into English — until someone suggested he set up a Facebook Group, and then 2,500 mostly expatriate Chichewa speakers arrived ready to help (there are, of course, many speakers of Chichewa in Malawi, but the need to access streaming video to do the translations made that nearly impossible).

Through the steadfast effort of about 25 of these people, the full twenty four hours of video has now not only been transcribed and translated, but put thorough about five stages of checking, rechecking and review to ensure its accuracy.  And, it is now the largest corpus of spoken transcribed Chichewa on the web.  (What might this ‘seed’ corpus enable down the road?  Chichewa online dictionaries?  Spell checkers?  Natural language processing?  Search? This group of translators may, without realizing it, be forging the way for a real Chichewa language online presence.)

For Global Lives, this set of ten videos is just the beginning of a much larger library of human life experience.  Not grand experiences, not Hollywood, not Bollywood — in the words of David Harris, the project’s director (responding to the umpteenth activist proposal, this one by yours truly) “we want boring!”  Because what we see as the everyday, the mundane, the routine is in fact a picture of our own humanity – and for that each Global Lives shoot is worth a thousand Hollywood productions.

The Global Lives installation in the Room for Big Ideas will be open through June 20, 02010 at San Francisco’s Yerba Buena Center for the Arts.  The Long Now Foundation sponsored the world premiere installation in the YBCA Forum through a grant from the William and Flora Hewlett Foundation.