Audience members at Arthur Ganson’s Seminar on September 14, 02009 were among the first viewers of The Lava Project Documentary, which premiered in our new Long Shorts series – short videos that explore, explain, or exemplify long-term thinking and responsibility.

The Lava Project Documentary was created by White Elephant DesignLab, a group of designers who explore natural phenomena and experiment with various materials and their external influences. Earlier this year, the group created a piece at the Kilauea volcano on the Big Island of Hawaii that was inspired by our promotion of long-term thinking through use of the five-digit date. Using a “02009” stamp made of hardwood and aluminum, they imprinted the congealing surface crust of Pāhoehoe lava in order to equip the emerging lithosphere with its date of origin. 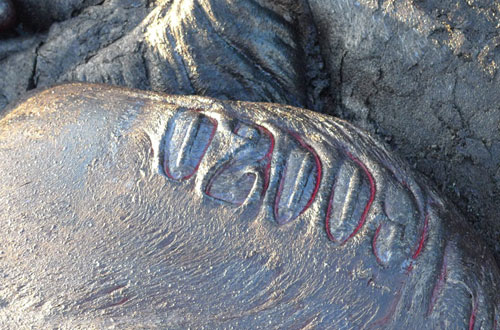 “We developed the idea of using this symbol only when we had already arrived on the island,” says Tobias Kestel of the design team. “We thought it was just the right symbol to use in this context of volcanic activity. Processes of new land being formed by lava flows have been going on for billions of years on the planet, which provided the perfect ground for embossing your symbol of long-term thinking.”

“We are aware,” Kestel adds, “that some people might still argue that we actually did alter the environment there. At the same time, the symbolic value and the message and discussions our action will provoke can be and will be of relevance, even if only a few people will start to think differently after having seen the results and having learned about your project, as we will always promote our project together with the reference to The Long Now Foundation.”

For additional photos and information about The Lava Project Documentary, visit the White Elephant DesignLab website.

Lil Buck with Icons Of Modern Art from NOWNESS on Vimeo. The Long Short for Suhanya Raffel’s seminar, World Art Through the Asian Perspective, featured American dancer Lil Buck dancing his way through the Foundation Luis Vuitton in Paris. “We’ ...

On August 6, 02014, the European Space Agency’s Rosetta probe successfully reached Comet 67P. In addition to studying the comet, Rosetta was able to place one of Long Now’s Rosetta Disks on its surface via its Philae lander. In 02017, ...

From the City to the Great Basin: a Trip to Long Now's Mountain in Nevada