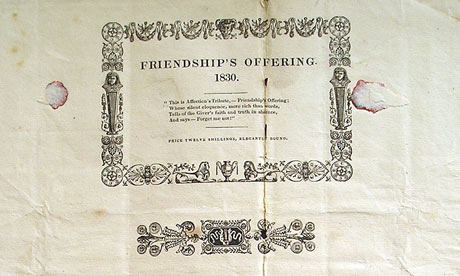 [Thanks to Emily for pointing both of these out to me]

The Guardian is running a story on the oldest dust jacket known which was recently ‘discovered’ in the stack at the Bodleian Library.

Unlike today’s dust jackets, wrappers of the early 19th century were used to enfold the book completely, like a parcel. Traces of sealing wax where the paper was secured can still be seen on the Bodleian’s discovery, along with pointed creases at the edges where the paper had been folded, showing the shape of the book it had enclosed.

In other slow news, have you heard? – 145 year old missing library book returned