In a post entitled “Temporary Becomes Permanent“, Kevin Kelly recently shared his thoughts at this blog on how fragments of culture that start out with a limited life expectancy can survive to become embedded much more deeply. The example he had in mind was the wartime graffito “Kilroy Was Here” which has now unobtrusively, yet unmistakeably, been etched in stone at the World War II Memorial on the National Mall in Washington, D.C.

A somewhat different instance of this temporary-to-permanent transition is found in the installation “Grand Gestures” by the Toronto-based 640 480 Video Collective.

The artists’ website explains this part of the Grand Gestures project:

The public component consists of ten ‘memorial’ style plaques interspersed along Queen West… Each bronze plaque will contain a partial transcription of a personal video that has been created on Queen St., which 640 480 sourced from youtube.com. By memorializing these banal and inconsequential videos with such markers of public remembrance, 640 480 draws our attention to the fleeting nature of video.

640 480 takes its name from the original 4:3 aspect ratio of video screens, and the group has an obvious affinity for the rapidly disappearing magnetic tape format. Memorial lapel ribbons made from videotape were also part of the grand Gestures installation, and taped copies of the videos are to be converted into an artificial diamond, signifying the preservation of memories from an increasingly obsolete format into an everlasting state.

So the intention seems to have been to pay tribute to a disappearing medium, magnetic videotape; a sentiment which resonates with the Long Now’s concern for the preservation of languages as well as the cultural record generally. However, the plaque installation also stands, more robustly I think, as a broader comment on the selectiveness of historical memory. By sitting in marked contrast to the parade of history’s conventional notables usually given the bronze-plaque treatment (to wit: stateman X spent an evening in this building; general so-and-so took a meal here; a certain poet was inspired to write about this view; etc), otherwise trivial and unremarked moments of everyday life are anointed as worthy of remembrance. Certain slices of the “temporary” are suddenly, and quite arbitrarily, rendered “permanent”. All of which refocuses the attention in a curious way, as the hierarchy of significance in human affairs is briefly turned upside down.

Of course, nothing lasts forever. Even with elements of lives memorialised in so (relatively) permanent a medium as bronze, things can happen to drop them right back into obscurity. 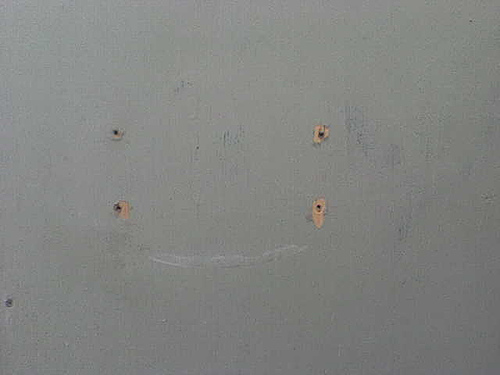 Where one of the 640 480 plaques used to be
Image from alexanderthematt‘s Flickr photostream, via Torontoist