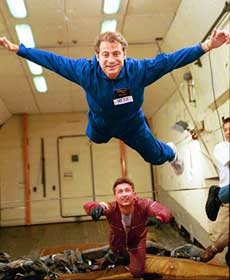 Pursuing the idea of “revolution through competition” via huge-purse prizes was inspired for Peter Diamandis by reading about the Orteig Prize. In 1927 $25,000 was offered to the first person to fly non-stop from New York to Paris. Nine teams spent $400,000 in the competition. A 25-year-old named Lindbergh won the prize. Within 18 months air passengers had multiplied 30-fold from 6,000 to 180,000, the number of aircraft increased four-fold, and aviation stocks soared.

A lifelong space nut, Diamandis created out of thin air the Ansari X Prize. $10 million would go to the first team to make a 3-person reusable space vehicle that could reach 100 kilometers in altitude twice in two weeks…

As climate migration pushes wildlife in Zimbabwe’s lush Eastern Highlands to extinction, how can this region find ways to adapt?