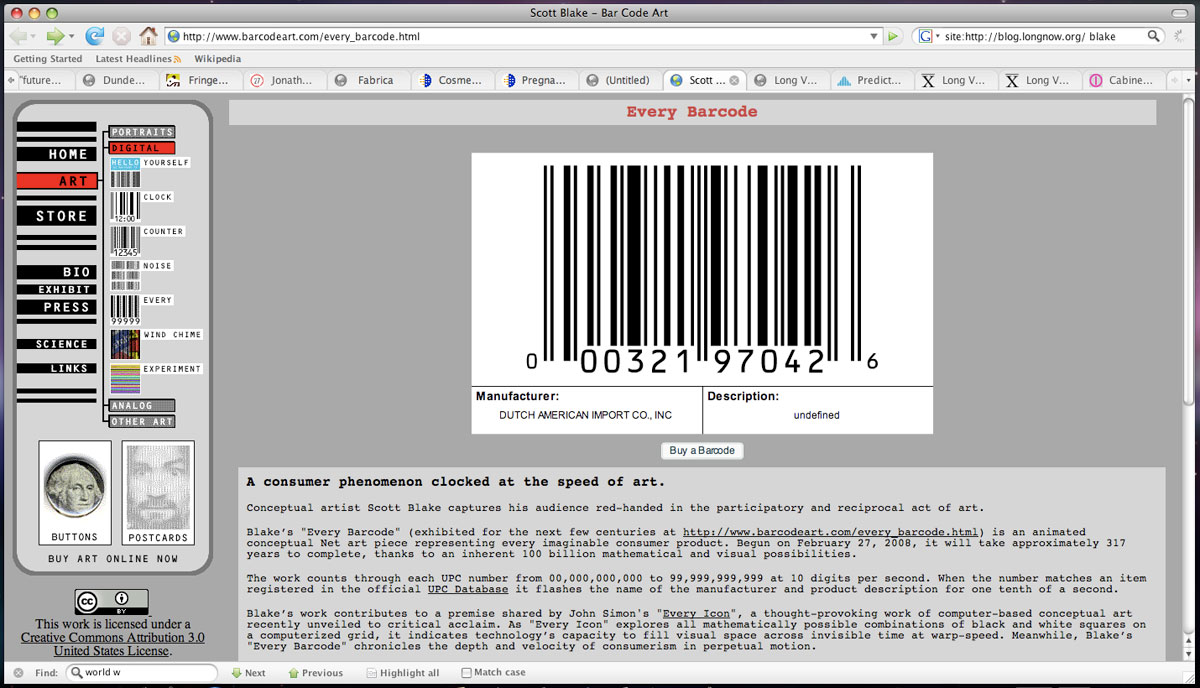 Blake’s “Every Barcode” (exhibited for the next few centuries at http://www.barcodeart.com/every_barcode.html) is an animated conceptual Net art piece representing every imaginable consumer product. Begun on February 27, 2008, it will take approximately 317 years to complete, thanks to an inherent 100 billion mathematical and visual possibilities.

The work counts through each UPC number from 00,000,000,000 to 99,999,999,999 at 10 digits per second. When the number matches an item registered in the official UPC Database it flashes the name of the manufacturer and product description for one tenth of a second.

Says Blake of his chosen theme:

My bar code art explores the process of making art with information and technology. As a computer artist I am in the business of selling 0’s and 1’s. The bar code represents automation, efficiency, and commodities. It is the universal icon for the computer revolution.

Those mystified as to how UPC (“Universal Product Code”) bar codes work may find enlightenment here.

Bar codes appeared in the mid-20th century to facilitate commercial sales and inventory, but the standardised UPC system was not invented by George Laurel until 01973, 35 years ago. Therefore the 317 years it would take Blake’s artwork to systematically and mathematically traverse the full possibility space encompassed by that design is nine times as long as it has been in existence.

Notwithstanding the project’s centuries-long future horizon, “Every Barcode” is decidedly a historical effort: a sort of temporal exploded view of the possibility space encompassed by the UPC design. And as such, it affords an interesting way of looking at where we’ve come from in terms of tagging and tracking a commercial subset of our physical world, dutifully ticking away at Blake’s website.

The piece may or may not last until 02325 — wanna longbet? — but regardless of how far into the future it endures, the practices of consumption and computation are rapidly changing today, and with them, so might we expect the technological iconography to shift, well before then.

The status of UPC as a “universal” tracking system, and hence its survival as an “icon for the computer revolution”, is currently in question as cheap, ubiquitous RFID tags (a.k.a. smart labels), touted as imminent replacements for the bar code, help usher in the age of Spimes. Futurist Bruce Sterling:

[P]retty soon, you will be wrangling Spimes.

The most important thing to know about Spimes is that they are precisely located in space and time. They have histories. They are recorded, tracked, inventoried, and always associated with a story.

Spimes have identities, they are protagonists of a documented process.
[…]
We need to document the life cycles of objects. We need to know where to take them when they are defunct.

In practice, this is going to mean tagging and historicizing everything. Once we tag many things, we will find that there is no good place to stop tagging.

The age of Spimes is already here, it’s just not evenly distributed yet: consider the maps of tracked objects, people, and vehicles — which are curiously individualised and schematic at the same time — for example here and here (“Flight Patterns”).

(Thanks to Sean Smith for passing on this link.)